Home » News » CBC Will Launch Revamped Version of ‘The National’ on Oct. 30

CBC Will Launch Revamped Version of ‘The National’ on Oct. 30 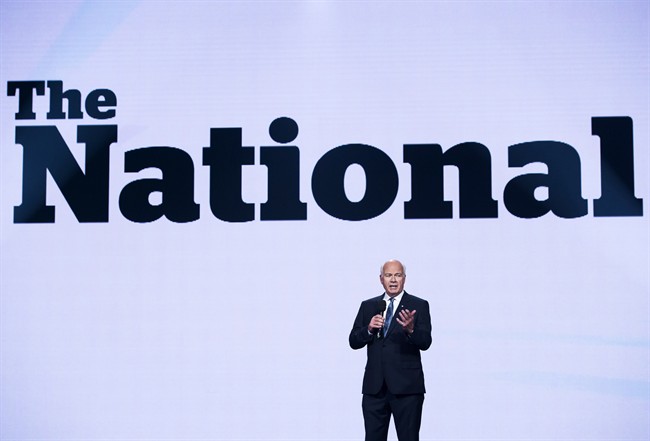 Peter Mansbridge, CBC News chief correspondent, speaks during the CBC upfront showcasing the CBC 2017-18 fall/winter lineup in Toronto on May 24, 2017. As Peter Mansbridge prepares to bid farewell to “The National,” the CBC’s flagship news program is looking to possibly enlist multiple hosts to fill his permanent spot at the anchor desk. “We want it to be a show around active journalists,” Jennifer McGuire, general manager and editor-in-chief of CBC News said in an interview during the network’s upfront presentation. (THE CANADIAN PRESS/Nathan Denette)

TORONTO – CBC will launch the revamped edition of “The National” on Oct. 30.

The public broadcaster is overhauling its flagship news program in the wake of long-time host Peter Mansbridge’s retirement.

He steps down after anchoring the network’s Canada Day coverage on July 1.

Jennifer McGuire, general manager and editor-in-chief of CBC News, has said there will be more than one host on the post-Mansbridge version of the show.

But a CBC spokesman says no decisions have been made on who will be the new anchors.

McGuire has promised a wholesale revamp of the show to bring it more in line with how viewers consume news in a digital world.

“(The National) was conceived at a time pre-24-hour news, let alone the continuous digital news environment that we live in. And we think that what people need at the end of the day has shifted,” McGuire said in an interview last month.

“Most nightly news shows tend to be a show of record and they look back on the day that was and try to touch every story and tell people what happened. It’s our feeling — and this is supported by research — that most people have some connection point to the news long before they touch it in the evening, so they need the show to take them somewhere else.”

Mansbridge’s career has spanned nearly five decades, including 28 years at the helm of “The National” as anchor and chief correspondent.