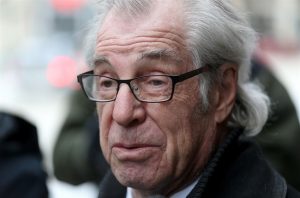 Lawyer Greg Brodsky speaks to media outside the Law Courts in Winnipeg after his client Andrea Giesbrecht was found guilty of concealing six dead babies in a storage locker, Monday, February 6, 2017. (THE CANADIAN PRESS/Trevor Hagan)

A Manitoba judge has rejected a bid to dismiss the conviction of a Winnipeg woman who hid the remains of six infants in a rented storage locker.

Andrea Giesbrecht was found guilty earlier this year of storing the remains in plastic bins in a U-haul storage locker.

Giesbrecht’s lawyer, Greg Brodsky, had asked the case be tossed because it took more than two years to conclude.

Brodsky argued that violated his client’s charter right to a timely trial, but the Crown said the timelines were reasonable.

Provincial court Judge Murray Thompson says Brodsky gave the court insufficient notice, as required by law, that he was planning to ask for a dismissal.

Thompson also says that if the matter had truly been important to the defence, Brodsky would not have waited so long to file a motion.

The judge is now delivering his sentence, which is being livestreamed.

Medical experts testified the infants were Giesbrecht’s and were likely to have been born alive, but the remains were too decomposed to determine how they died.

The Crown has asked for a sentence of 11 years minus time served, while Brodsky has said his client should not serve any more time beyond the 168 days she spent in custody following her arrest.