‘Quit Your Whinging’ and Get to Folklorama’s UK Pavilion 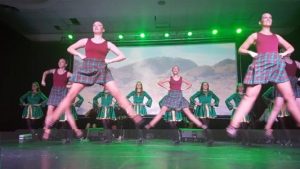 The United Kingdom Pavilion is on now until August 12. (FACEBOOK)

WINNIPEG — No talk of Brexit here — all four countries of the United Kingdom are living in harmony at Folklorama.

Our tour guide, one of the youth ambassadors, whisked us away as soon as we walked in, took us up to the cultural display, and began discussing with us the incredible amount of cultural contributions the United Kingdom has given the world. We talked everything from national flowers (did you know that Northern Ireland has two national flowers? And that one of them is a leek?) to our Hogwarts houses (they’ll sort you if you don’t know) — be sure to ask the volunteers questions, because they’ll be able to answer.

She led us into the main hall just in time for the first show of the night. Out of the dinner options, and although I was tempted by the fish and chips, I chose to eat something I’d never ordered before — bangers and mash. What came was actually pretty unadventurous, although still very tasty — a pair of maple-y garlic sausages with mashed potatoes and gravy. The side dish, served in a Styrofoam cup on my plate, was mushy peas, which is exactly what it sounds like. Looking like baby food, tasting like regular peas with the consistency of mashed potatoes, I didn’t finish it. Perhaps my one-eighth English heritage wasn’t enough to get it down.

My dining partner and I shared three drinks throughout the night. The first, a beer, as you do when you’re touring countries known for drinking — McEwan’s Ale, which was crisp, cool, and refreshing in the hot venue (the program says it’s air conditioned, but it did not feel like it). Don’t be fooled by its dark colour, it’s much smoother than it looks. We also tried two specialty drinks: the non-alcoholic Butterbeer, appropriate for their Harry Potter night, and the TARDIS cocktail. The Butterbeer was a mixture of ice, a beige cream soda, and butterscotch syrup, and that’s what it tasted like — cold, thin butterscotch syrup. It separates fast, but it’s cold, and it goes down sugary and easy. The TARDIS, named after the spaceship-and-time-machine from “Doctor Who,” was part vanilla vodka and part blue curacao, and tasted oddly similar to the Butterbeer — cold and sugary. But definitely more adult.

The mainstage show offered a taste of many different styles of dance, from children swirling around a maypole to what seemed like a precursor to a medieval red-and-black sacrificial ritual (it was awesome, don’t get me wrong). It ran a straight 45 minutes of dancing and music with no breaks from a host to explain what dance came from where, and it all became to blend together. One thing that the UK Pavilion can boast about is its live musicians. Instead of playing tracks through a speaker, their live band on stage gave a special element that not many other pavilions will have. A word of caution: avoid sitting near stage right, like I did — that’s where the bagpipes live.

Go if: You like Brit pop, BBC, the Royal Family, or any of the huge amount of pop culture the UK has contributed — they have special theme nights every night.
Avoid if: You’re on an all-veggie cleanse — the food is made for meat-eaters.