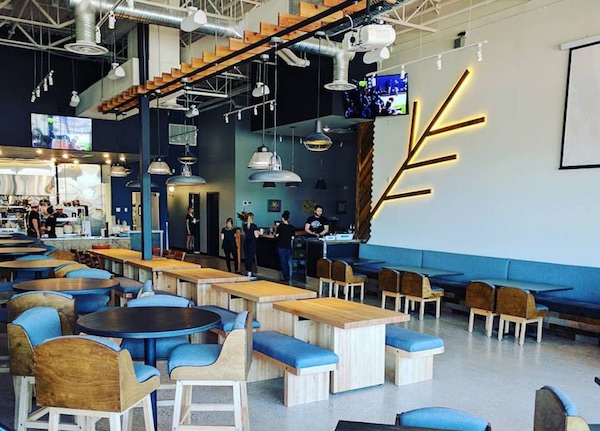 The Winnipeg dining scene has recently changed with government permission granted for “brew pubs” in the city. A brew pub can brew beer on site as well as offer up lunch and dinner for a full chef-directed kitchen. Winnipeg now boasts three such establishments and recently we visited One Great City at 1596 Ness Avenue.

We live just across the Assiniboine River from the Polo Park area and we decided to walk on a beautiful summer evening. Upon arrival, we were both hungry and thirsty and looking forward to the visit. The first order of business was our thirst and we chose a beer “flight” so we could taste four of the six beers which were premise-brewed.

One Great City has an extensive “Sammy” (sandwich) section and we both ordered from there.

My husband chose a Falafel wrapped in a pita with a side of roasted Brussel sprouts. The latter was stellar with extra crunch from toasted walnuts and apples, creaminess from the queso fresco and extra flavour from the bacon. Doesn’t bacon make everything taste better?

First I spied chicken and waffles — a selection which is spreading like a wild fire on local menus. I decided instead for the chicken but requested that the bread be skipped which I guess means it was no longer a sammy. The lightly fried chicken thighs were accompanied by lettuce and buttermilk ranch dressing, as well as bread and butter pickles and a fiery jalapeno relish. 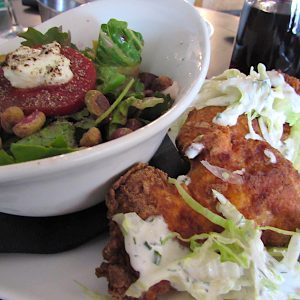 The chicken was served with a petite beet salad. I appreciated the creamy ricotta, spritely spring mix but was especially delighted by toasted pistachios and apple fennel vinaigrette. In fact was so tasty that I could easily have eaten a second one.

The facility is bright and spacious and you can walk past both the beer tanks and the open kitchen en route to your table. The service was attentive and prompt and it looked as if there were loads of staff members to take care of us. One Great City had us feeling patriotic about our urban location because as their name reminds us, we live in one great city!

One Great City is owned by Jon Burge and Tim Hudek. Lunch and dinner menus are available. They are open daily from 11:30 a.m. until 12 a.m. and are wheelchair accessible.