Home » Entertainment » Review: ‘The Phantom of the Opera’ at Centennial Concert Hall

Review: ‘The Phantom of the Opera’ at Centennial Concert Hall 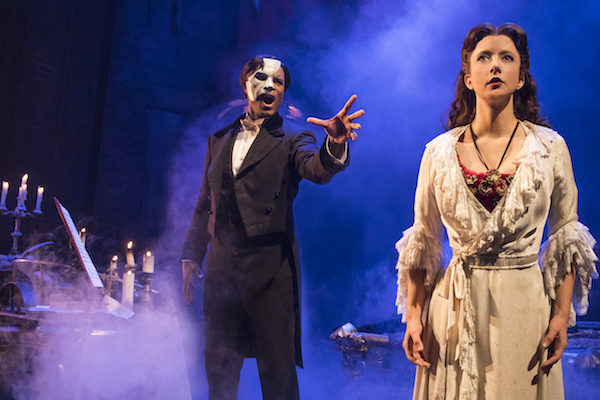 “The Phantom of the Opera” is on now until September 3 at the Centennial Concert Hall. (MATTHEW MURPHY PHOTO)

WINNIPEG — Close your eyes and think about ‘80s musicals — you can probably hear the opening notes of the Phantom of the Opera blasting in your ears even if you’ve never seen the show (perhaps it’s because the commercials play every 45 seconds on Winnipeg airwaves lately, but I digress). The notes are nothing short of iconic. For the last 30 years, tourists have flocked to the Majestic Theatre in New York City to see the original production of Phantom, and it continues to hold its own on Broadway, despite bigger and newer productions moving in over the decades. I was one of those tourists a few years ago on my first trip to the Big Apple, watching history happen when Norm Lewis took the stage as Broadway’s first black Phantom.

The productions on Broadway and in London are what the biz calls “frozen” — after opening, nothing changes, except for the cast — the sets, costumes, script, and special effects all stay the same, and will until it closes (if it closes). But on tour? On tour is a different story — they do not have the same obligation of loyalty, and I’m thankful they don’t.

There are some very outdated aspects of Phantom that are done away with on the tour — more than one of the changes have to do with getting rid of mannequins. The creepy bride mannequin that pops out of the mirror during “Music of the Night” is gone, and the filler mannequins during “Masquerade” are gone. There’s nothing they can do about the very ‘80s drum machine in the title song, which makes it stand out amongst the rest of the orchestral score, but I guess that’s part of its camp.

This is a much darker Phantom than you may have seen before — the murders are in plain view, there’s a brief thought of suicide (blink and you’ll miss it), and the revamped opening scene leaves Raoul, Vicomte de Changy, as a ghost, haunting his former self in his memories of the Opera Populaire. These changes give the show a much-needed edge three decades after its premiere, and it’s fun for return viewers to see what choices the creative team has made in each production.

At my surprisingly full Thursday matinee, principal Phantom Derrick Davis was in, playing opposite the Christine Daaé standby Kaitlyn Davis. I saw this production a month ago in Vancouver with now-principal Christine Eva Tavares, who also gives a wonderful performance.

In my mind, the ideal Phantom is passionate but nervous, desperate when it comes to Christine, and cocky when it comes to everyone else. Derrick Davis checks all of these boxes. His performance is so moving it always leaves me wanting to stay in my seat and stare at him for as long as the theatre staff will allow me. His deep, smooth voice is perfect for the role and I made a bet with myself that if he removed his mic, his powerful song would still carry. He is worth the price of admission alone.

Kaitlyn Davis chose an uncommon angry portrayal of Christine. Lots of Christines are more desperate or hopeless, but instead, she attempts to demand the reins to her own future, and she’s angry at the men in her life for leaving her helpless. It made me think of the show in a new way — Christine is burdened by her late father’s last name, by the Phantom’s strict and controlling training, and by Raul’s inability to listen to her. I would be angry too. Davis’s choice to not make Christine desperate makes the Phantom seem all the more desperate, which is how he should be. She is also, of course, pitch perfect, a requirement for one of the most well-known soprano roles in musical theatre.

Despite all of this goodness, the part of this production that excites me the most are the new sets. I don’t want to spoil the surprise, but the set during the title song when the Phantom and Christine descend to his lair brings a whole new layer to the show and to the Phantom’s unexplained magic. The set during the masquerade party is lined with mirrors, a tip of the hat to the source material: Gaston Leroux’s novel, where the Phantom has a trap of a maze of mirrors.

Usually, whenever people mention Phantom of the Opera, I roll my eyes. I’ve seen it, been there, done that. It’s outdated and done its job in the theatre canon — or at least, I thought that until I saw this new production. It may have just changed my mind.

Phantom is on now at the Centennial Concert Hall until September 3. For ticket information, visit Ticketmaster.ca.