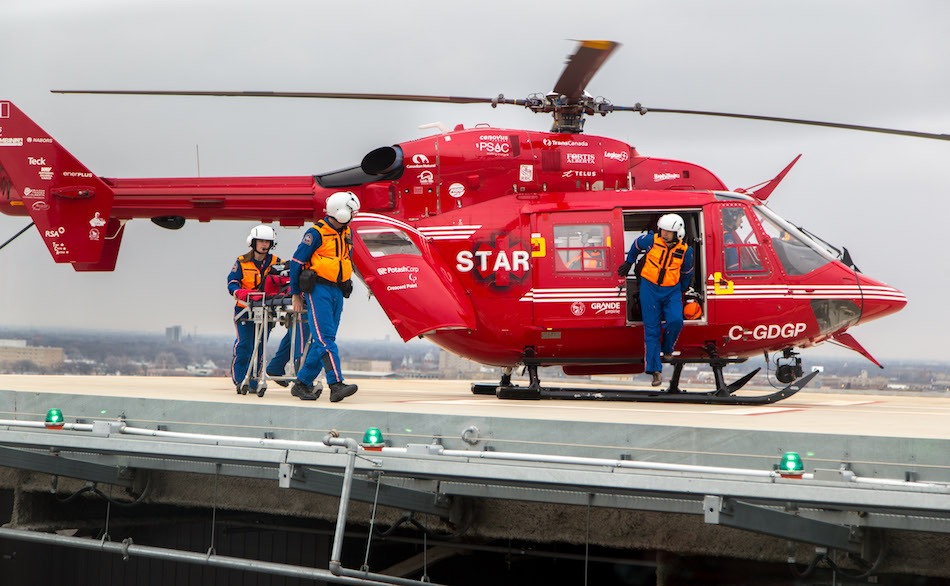 STARS air ambulance lands on the new heliport at HSC Winnipeg during a test flight on Friday, November 25, 2016. (WRHA / HANDOUT)

The last two weeks on Manitoba roads have been the most fatal of the summer, with numerous crashes claiming six lives on highways west of Winnipeg.

As the Labour Day long weekend approaches, Manitoba Public Insurance and STARS air ambulance have released a distracted driving safety video in an effort to reduce serious injuries and deaths.

The video was shot in May in Steinbach, where more than 200 Grade 10 students were bussed to the Southland Church parking lot to view a mock accident from a 911 call to a funeral post-event.

“Distracted driving is a major cause of motor vehicle collisions in Manitoba,” said STARS base director and flight paramedic Grant Therrien.

“Hopefully this video will be a strong reminder to motorists to keep their eyes on the road and their hands on the wheel.”

The video was produced and sponsored with the help of STARS, United Driver Training, RCMP, Southern Health-Santé Sud and the Steinbach Fire Department.

Releasing the video to the public is meant to remind drivers of all ages across the province to keep their eyes on the road and hands on wheels.

Watch the video below: