One of three suspects caught on surveillance video during a snowmobile theft in Gimli on Wednesday, December 13, 2017. (RCMP HANDOUT) 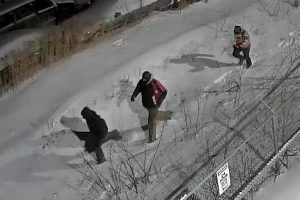 RCMP are investigating the theft of three Polaris snowmobiles from a Gimli business on Wednesday.

Police were notified at around 1:35 a.m. that a theft was in progress.

The combined value of the stolen snowmobiles is approximately $50,000.