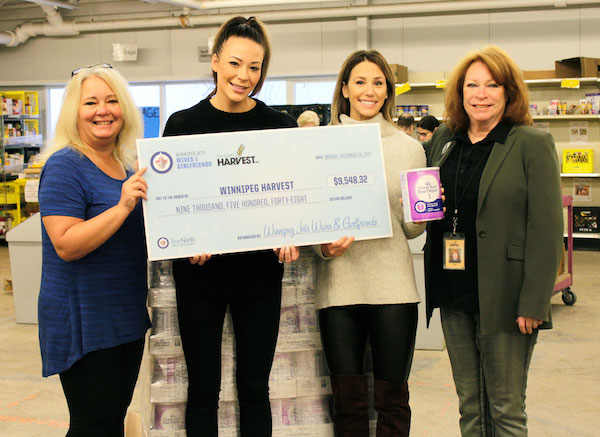 Winnipeg Jets‘ wives and girlfriends have scored big in raising more than $9,500 in donations for Winnipeg Harvest.

Through the sale of autographed holiday ornaments at the December 3 home game, funds for the “Fa La La for Formula” initiative went to purchase baby formula for the local food bank.

“We were invited to Winnipeg Harvest last year as part of a True North service day and we found out that they’re often short of baby formula,” said Sam Wheeler, wife of captain Blake Wheeler.

“Many of us are mothers ourselves, so infants going hungry really hit home.”

Wheeler, along with Emily Byfuglien — wife of Dustin Byfuglien — presented a cheque Winnipeg Harvest during an event on Monday.

Winnipeg Harvest provides baby formula to an average of 1,600 babies every month. One pallet of formula costs the food bank approximately $5,000, which feeds 300 babies for one week.