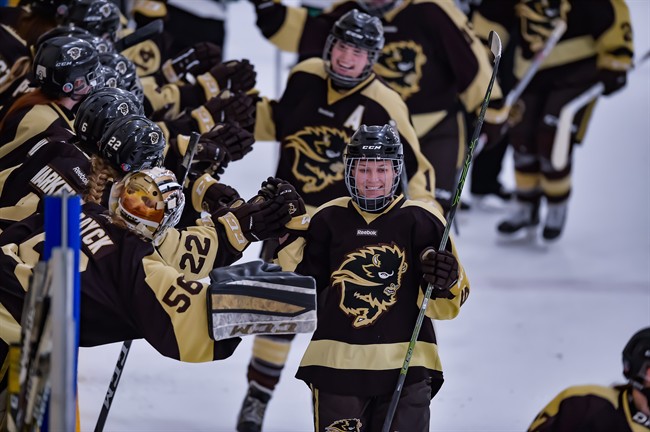 The University of Manitoba women’s hockey team knows what it is to go the distance and then some.

Over half the team went to quintuple overtime to win a conference playoff game two years ago. So Bison veterans have played in the two longest games in Canada West women’s hockey history.

“Our team, I feel like a lot of us feel we’re never out of any game that we play in,” said fifth-year forward Alana Serhan of Porcupine Plain, Man.

“Our bench is a fairly deep bench. Often we’re playing three to four lines the entire game, something that few other teams really have the ability to do. That allows us to last longer than maybe some other teams who are pushing one or two top lines.”

The Bison women are the No. 1 seed and looking for their first national title heading into the USports championship.

The championship game is Sunday at the Thompson Recreation and Athletic Centre.

St. F-X forward Daley Oddy was awarded the Brodrick Trophy as the women’s hockey player of the year on Wednesday night as the national award winners were celebrated at the annual All-Canadian gala.

Nipissing forward Maria Dominico captured rookie of the year honours, while Ryerson forward Ailish Forfar earned the Marion Hilliard Award for student-athlete community service for her outstanding contribution both on and off the ice.

They won the conference on home ice with a two-game sweep of Saskatchewan.

But the turning point of their post-season was Jordyn Zacharias scoring at 13:30 in the fourth overtime Feb. 25, for a 1-0 win over Alberta in the deciding Game 3 of their conference semifinal.

“We went into a five-overtime game in Saskatoon two year ago in the quarterfinals and a lot of our players were on that team,” head coach Jon Rempel said He was named coach of the year on Wednesday night. “We had a point of reference in terms of how to navigate through it.

“I thought that really helped. We drew a lot on that experience.”

Venla Hovi assisted on the winning Zacharias goal less than 24 hours after arriving from Pyeongchang, South Korea, where she had helped Finland win an Olympic bronze medal.

Hovi skipped the closing ceremonies to re-join the Bisons. She set up the winning goal with a borrowed stick as hers didn’t arrive with her.

It was Hovi who had scored the winner at 9:02 in the fifth overtime two years earlier against Saskatchewan.

Rempel, who has coached the Bison women for 14 years, was named Canada West’s women’s hockey coach of the year.

“If there’s one difference in this team from maybe years previous, we were able to consistently play the right way and it didn’t matter if we beat a team one-nothing or six-nothing,” he explained.

“That’s maybe something we didn’t do in the last few years or we tried to press in certain games that were close and ended up making a mistake that would cost us at a crucial time. This team really didn’t do that this year.”

Goaltender Lauren Taraschuk of Winnipeg was chosen the conference’s top rookie with a minuscule .71 goals-against average and a gaudy .961 save percentage.

The Bisons were runner-up in Canada West in both 2015 and 2016, which would have put them in the national championship had the University of Calgary Dinos not had an automatic entry as the host team.

Manitoba fell just short of getting to the final eight in 2017 when Alberta eliminated them in the semifinal.

“All the heartache in the last few years of being so close to getting here and not quite knocking the door down, I think all that stuff has made this team extraordinarily resolute and very, very stubborn and very persistent,” Rempel said.

“We have a lot of skill in this lineup too. This team is a lot more than that. It’s very focused and system-oriented and doesn’t get rattled by a lot of stuff.

“The culmination of all those things is why I feel this team is ready to knock that door down and take that final step.”