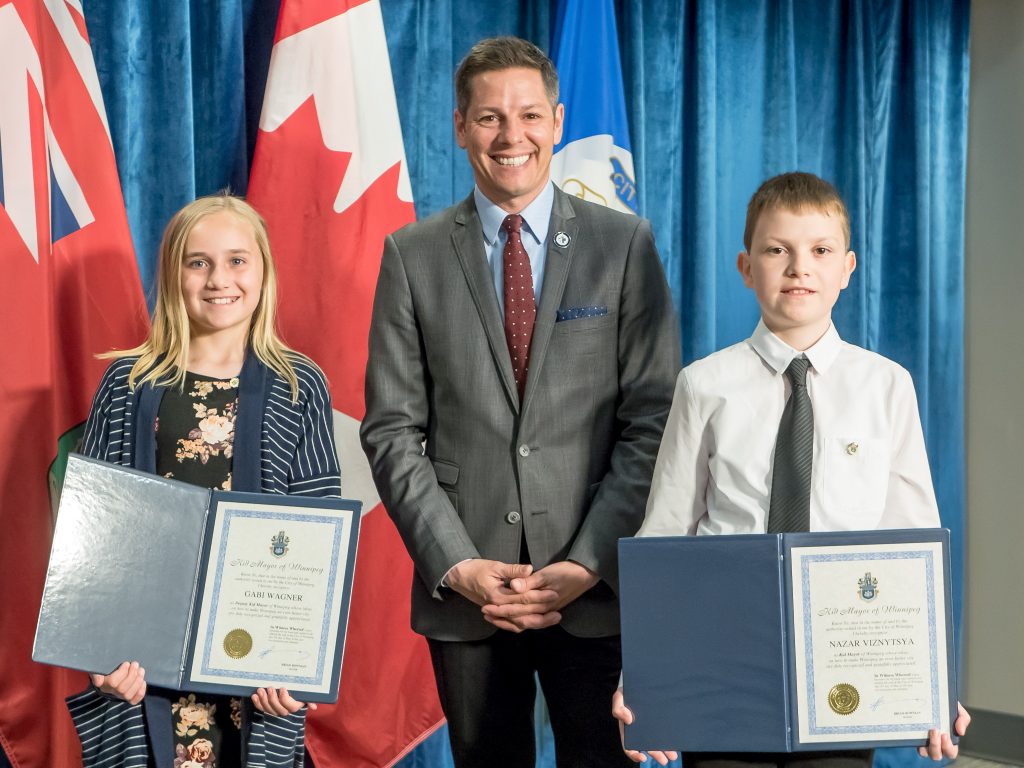 Winnipeg has its first kid mayor.

Mayor Brian Bowman announced Thursday that Nazar Viznytya is the new Kid Mayor, after being selected by a panel of judges.

“Congratulations to Nazar on being selected Kid Mayor of Winnipeg,” said Mayor Bowman. “I want to thank everyone who submitted an application to become Kid Mayor. As well, thank you to our external panel of judges for volunteering their time to review all eligible applications and selecting the winning submission.”

Nazar will join Mayor Bowman Tuesday, May 15, for a full day of mayoring, including help run Tuesday’s Executive Policy Committee. There, he will tell EPC his plans to make the city a better place to live.

Kid Mayor was a contest launched earlier this year. About 250 submissions were recieved.

Gabi Wagner has been identified as Deputy Kid Mayor.

“Thank you, Gabi, for entering the Kid Mayor contest and for submitting very thoughtful ideas on how to make Winnipeg a better place to live,” said Mayor Bowman. “Because of your very strong runner-up submission, I thought it fitting to recognize your effort as well, and I’m glad you’ve accepted the appointment as Winnipeg’s Deputy Kid Mayor.”

The external panel included the Hon. Gary Filmon, Johanna Hurme, Ace Burpee, and Sarah Nick. Each judge independently reviewed and identified their top three submissions. Of the over 200 eligible submissions reviewed by the judges, Nazar and Gabi were the only two identified in the top three by multiple judges.

Read their submissions below:

In Canadian cities, a mayor is elected to represent the city. However, mayors have no veto power and must argue for their decisions just like any other council member. The mayor’s office is located in a city hall. Mayors also are promoters of their city trying to influence tourism and urbanization to their city. In short, a mayor is basically a salesperson for his or her city. Along with this mayor’s also have another crucial role which is to motivate the people of the city during disasters. This is very important as without motivation people will do nothing. To achieve this, mayors must be strong leaders and great public speakers.

To make Winnipeg better then it already is I think a simple little thing could be done. This thing is to put more streetlights downtown. Now I know this will take a lot of money and time, however, the amount of tourism it will bring back into the city, and even the amount of regular citizens it would bring back to downtown Winnipeg will surely make the city a profit. I say this because the number one reason of people not liking Winnipeg is how scared they get when they walk outside in downtown at night. After all downtown is where most of our culture really is and if people are scared to go to downtown then our culture is as good as nothing. So this is why I think the city needs to put more streetlights in downtown.

I think that mayors make decisions that they think are right for us in Winnipeg.

To make Winnipeg better I think businesses should pay girls as much as they pay boys so that girls growing up like me will have the same chances as boys for jobs.

Something else I think we should do is make the paths and streets safer so that kids walking home or to school won’t feel unsafe like I do sometimes when I walk with my brothers. I think we need more gardens so we can have fresh food and fresh air and less of all the bad chemicals I feel we could plant more trees to clean the air and have more open fields to relax and have picnics and play with family and friends.

I think we should have more celebrations and carnivals so we can interact with one another and use less electronics. One of the celebrations should be in summer where you bring your own compostable items and make dirt to fill a city garden with your family and other families too. In the fall we could have another celebration where we take all our fresh food and make a meal for some homeless people beach they need it too.

Why I think of all of this is because I just want a bright future for me and all of my friends and classmates and family and for everyone else who lives in Winnipeg.