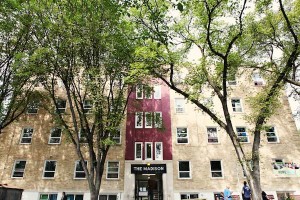 Siloam Mission is celebrating the generosity of Manitobans after donors stepped up to save the kitchen in its supportive housing facility, The Madison.

On August 1st, Siloam Mission put out a call for donations to help repair an aging kitchen that risked closure sooner than expected. Siloam Mission appealed to its donors and generous neighbours across Manitoba to raise the $150,000 in estimated costs – and as of August 31st, just 30 days later, has reached that goal.

“We didn’t know what to expect, except that people would be generous,” says Siloam Mission CEO, Jim Bell. “But the generosity we saw this month was truly incredible. The response has been inspiring; we are truly blessed, and so thankful for the support of so many amazing people in our community.”

The kitchen at The Madison was one of the building’s only features not renovated after its purchase in 2011. At the time, Siloam Mission leadership estimated the kitchen would last longer – but due to deteriorating equipment and changing building codes, the need for replacement came more quickly than anticipated.

The Madison provides a home for many former Siloam Mission guests and clients who have successfully transitioned out of homelessness, as well as indigenous youth in the Exit Up! program who have aged out of CFS care and are at risk of becoming homeless.

The kitchen, which is central to this community, can now undergo all of the upgrades needed to ensure everyone has the food and space for community that they count on every day.