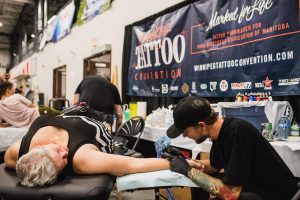 A convention goer gets inked up at the 2018 Winnipeg Tattoo Convention. (DWAYNE LARSON)

The second annual Winnipeg Tattoo Convention raised $14,000 for the Mood Disorders Association of Manitoba (MDAM). A majority of the funds were raised at the convention’s Marked for Life booth where visitors could get tattooed with all proceeds going MDAM.

During the three-day event, the Marked for Life booth had 36 volunteer tattoo artists from around the world donate their time to complete 75 tattoos. Booth visitors picked from pre-drawn designs and donated set amounts for their tattoos resulting in more than $11,000 in donations. Adding this year’s funds raised to last year’s means the convention has helped raised $27,550 for MDAM.

“We are blown away by the support of artists and convention goers who really stepped up to make this fundraiser a success. We are thrilled to be able to help the Mood Disorders Association of Manitoba continue their life-changing work in our province,” says Rich Handford, Winnipeg Tattoo Convention event coordinator.

The funds will be used to sustain MDAM’s new Transitions program which will support Indigenous youth moving to Winnipeg from rural and remote areas to attend school.

“We are grateful to the participants and organizers of the Winnipeg Tattoo Convention as this gives us the opportunity to promote resilience in Aboriginal youth. This program will provide the tools and skills for shared experience, peer support and understanding of what one needs to personally flourish,” explains Tara Brousseau Snider, Executive Director with MDAM. “MDAM gives knowledge of depression and anxiety and promotes recovery for those who are at risk.”