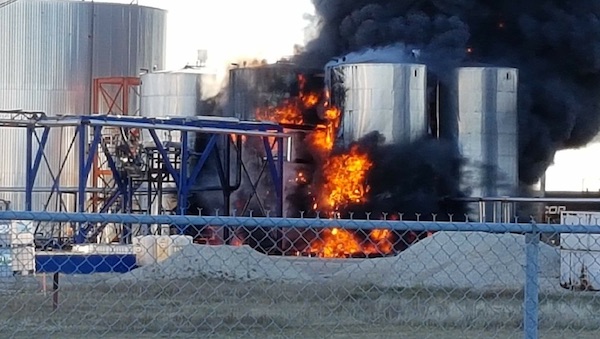 A fire burns at Pounder Emulsions, an asphalt plant in Transcona, on Monday morning, sending plumes of black smoke into the air. (SUBMITTED PHOTO) 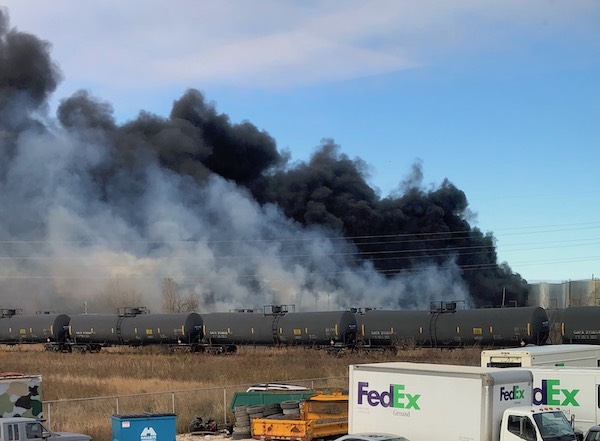 WINNIPEG — Dark plumes of smoke blew across east Winnipeg Monday when a fire ignited at a Transcona asphalt plant.

The fire at Pounder Emulsions in the RM of Springfield began at around 10 a.m. Fire crews from the rural municipality and City of Winnipeg responded to the industrial area on Gunn Road near Saunders Street and began tackling the blaze.

The city advised people with breathing conditions to stay indoors and keep doors and windows closed, but the province’s Sustainable Development now says air quality showed no detectable concentrations of hazardous gases. However, residents may still notice a distinct odour.

The fire was knocked down as of 4:30 p.m., but the Springfield Fire Department remains on scene to monitor the situation and cool the asphalt tanks.

An 800-metre evacuation put into place earlier in the day has also been lifted.

The Transcona Kinsmen Centennial Pool and Transcona Library will be closed this evening as a result of the fire.

Localized road closures will remain in effect in areas near the location of the fire to facilitate ongoing operations until further notice.

There’s no word on what may have caused the fire. This story will be updated.