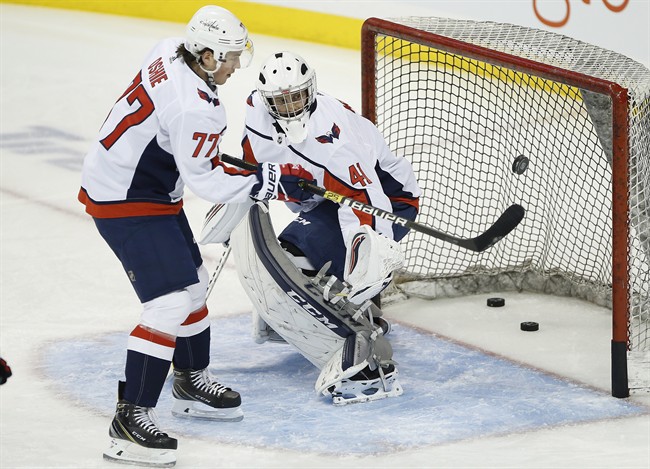 Washington Capitals’ T.J. Oshie (77) scores on his goaltender Gavin McHale (41) during the warm-up period prior to NHL action against the Winnipeg Jets in Winnipeg on Wednesday, November 14, 2018. McHale is a women’s goalie coach at the University of Manitoba and was filling in when Capitals goaltender Braden Holtby (70) was pulled from the game. (THE CANADIAN PRESS/John Woods)

WINNIPEG – Ian and Val McHale got a call from their son Gavin just hours before the Winnipeg Jets hosted the Washington Capitals on Wednesday night.

The excited 31-year-old told his mom to put the phone on speaker so they could hear his news together — he was going to be the emergency backup goaltender for the defending Stanley Cup champion Capitals.

Washington starter Braden Holtby was a late-day scratch with an undisclosed upper-body injury so the Capitals needed someone to back up goalie Pheonix Copley.

“This is his dream come true to go on the surface in an NHL game,” Val said after she and her husband proudly watched their son from the press box get a bit of time in net during the pre-game warmup.

“His first shot in the warmups was Ovechkin. Over his shoulder,” Ian added with a smile. “But it’s OK. A couple of the other people have said that’s the job of a backup, make the players feel good.”

McHale didn’t get into the 3-1 Winnipeg victory, but he had a big smile after the game, especially recalling Ovechkin’s shot.

“Not even close. Not even close,” he said of his attempt to stop it. “I was pretty star struck. It was like, who’s shooting on me now? Probably should have been focusing a little more on the puck.”

The six-foot-seven, 200-pound full-time personal trainer is in his second season as one of the emergency backups available for NHL games in Winnipeg. He used to play in the Western Hockey League and also with the University of Manitoba Bisons.

McHale, who had to sign an amateur tryout contract, met the players before the game and then sat in a seat in the stands beside the exit door to the visitors’ dressing room.

“I was thinking, ‘Get that thing on as fast as you can,’ ” McHale said.

He had been a backup last February when the Jets were hosting Colorado. Jonathan Bernier was injured during the second period and was replaced by Semyon Varlamov to start the third. McHale had to watch that game from the dressing room.

“He was fine in the warmup,” Washington coach Todd Reirden said of McHale. “It was a great opportunity for a local guy. As we’ve seen in the league over the last couple of years, you never know.

“He was great coming into our room and talking to our guys. I liked having him around.”