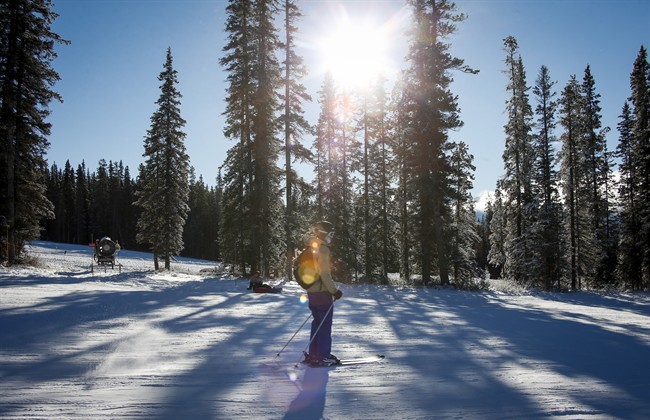 A skier passes trees on a ski run at Lake Louise ski resort in Lake Louise, Alta., Saturday, Nov. 24, 2018. A judge is to sentence a world-renowned Alberta ski resort today for cutting down endangered trees five years ago. The Lake Louise resort in Banff National Park pleaded guilty last December to taking down a stand of trees, including some whitebark pine, along a ski run in 2013. (THE CANADIAN PRESS/Jeff McIntosh)

CALGARY – A judge had harsh words Friday for a world-renowned Alberta ski resort as she fined it $2.1 million for recklessly cutting down endangered trees five years ago.

Lake Louise Ski Resort pleaded guilty last December to taking down a stand of trees, including 38 endangered whitebark pine, along a ski run in 2013.

“There is a cumulative impact on the whitebark pine with potential risk of undermining the survival of the species in the decades to come,” said Judge Heather Lamoureux.

Lamoureux noted the trees were cut in a national park, the resort failed to ensure its employees knew the whitebark pine was endangered and the trees that were destroyed were all healthy.

“The Crown has proved beyond a reasonable doubt that the actions of (Lake Louise Ski Area) and its employees were reckless given their knowledge of the constraints of operating a commercial ski hill in a national park,” she said.

“The risk of harm was easily foreseeable.”

Lamoureux gave the resort a year to pay what amounts to about $55,000 a tree.

A spokesman for Lake Louise said the resort will probably appeal the fine, which is almost double what it had expected.

Dan Markham said the judge appears to have ignored evidence at the sentencing hearing that suggested cutting down the 38 trees would not have any impact on the overall whitebark pine population in Canada.

“It was clearly presented in court and admitted by the prosecutor that there was zero impact at any level of whitebark pine that were cut,” said Markham, director of brand and communications at Lake Louise.

“That kind of information not being included and considered in the judgment is something we have to consider, so at this point in time we’re going to be appealing the decision.”

He said steps have been taken to ensure no other whitebark pines are cut down. They include better staff education and marking the 7,000 whitebark pines within the resort area.

An agreed statement of facts said that in 2013 a trail crew, consisting of six employees including a supervisor, began cleaning up, doing fencework and trimming and removing some trees on Ptarmigan Ridge at the ski resort.

The document said that in late September of that year, the workers cut down a number of trees, including endangered whitebark pine, without a permit.

DNA analysis confirmed the trees were whitebark pine. The matter was turned over to Parks Canada for an investigation and charges were laid.

Prosecutor Erin Eacott said the Crown had asked for the substantial $2.1 million fine to send a message.

“In a national park, it’s even more aggravating, so you need a significant deterrent to make sure that people who are working in parks and people who are visiting parks are protecting our species,” said Eacott.

“These trees take 40 years to reach cone-bearing age. They take another 60 to 80 years to actually have any significant number of cones, so it’s a tough life for this species.”

The five-needle whitebark pine is considered crucial because it provides food and habitat for animals, as well as helps stabilize steep subalpine slopes.

The tree exists at high elevations in western North America at or close to the treeline. They have been growing on the continent for 100,000 years and can grow to be between 500 and 1,000 years old.