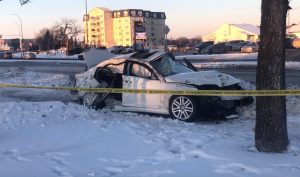 Five people were injured when a sedan crashed in the St. Norbert area on Friday, December 7, 2018. (KEEGAN DRIEDGER / SUBMITTED)

Emergency crews responded to the 3400 block of Pembina Highway near Ducharme Avenue at around 12:55 p.m.

One person was originally listed in critical condition, two in unstable and two in stable, according to the city. All of have since been upgraded to stable condition.

Video from the scene showed a four-door sedan heavily damaged with all airbags deployed. A nearby tree also appeared to be hit by the vehicle before it came to a rest.

Police are working to determine if speed was a factor in the crash.

A second vehicle, a black two-door sedan, may have been travelling with the white sedan on Pembina Highway and later stopped at the scene of the collision. Investigators have since spoken with the occupants of that vehicle.

The investigation into the crash is continuing.