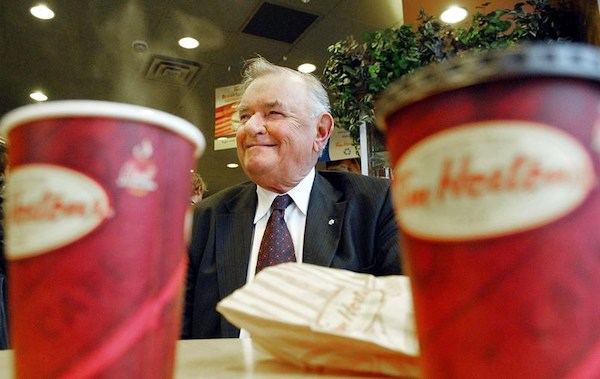 Ron Joyce, who rose from a childhood marked by the Great Depression to co-found the Tim Hortons doughnut chain, has died at the age of 88.

Joyce died Thursday in his Burlington, Ont., home with his family at his side, the family said in a statement.

The cause of death was not immediately clear.

“My father had a big vision and a big heart. Through hard work, determination and drive, he built one of the most successful restaurant chains in Canada,” said Steven Joyce in a statement on behalf of the family.

“He never forgot his humble beginnings.”

Joyce was born in Tatamagouche, N.S., in 1930, with two siblings to follow. The family moved to Westville, N.S., where his father struggled to find construction work due to the ripple effects of the Depression.

His father died in an accident when Joyce was three years old, while his mother was pregnant with their third child.

She moved the family back to Tatamagouche, where she bought a three-room house for $500 — half of the life insurance payment. Her other income came from a $20 monthly widow’s allowance.

The house had no running water, electricity or insulation. A wood burning stove in the middle of the living room provided heat and was used for cooking and baking.

Joyce described this “modest upbringing” in his memoir “Always Fresh: The Untold Story of Tim Hortons.”

He did not complete high school, but left Tatamagouche for Hamilton, where he gained worked in factories, the navy and a police force, according to The Canadian Encyclopedia.

He went on to invest in the first Tim Hortons shop in Hamilton in 1964. He purchased that first restaurant for $10,000. He helped grow it into a successful chain and in 1995, the company opened its 1,000th store.

In 1967, Joyce and Tim Horton, the professional hockey player, became full partners in the company. When Horton died in a car accident in February 1974, Joyce became the sole owner, purchasing his deceased partner’s share.

He sold the chain to Wendy’s International Inc. in 1996. It was later purchased by Burger King and the two brands became Restaurant Brands International in 2014.

“Ron was a larger-than-life friend who not only helped create one of Canada’s most iconic brands but was passionate about ensuring Tim Hortons always gave back to the community,” reads a statement signed from the Tim Hortons team.

His work with charitable organizations will continue to have a lasting legacy for future generations, the statement said.

He helped found the Tim Horton Children’s foundation in 1975 after his business partner died. The foundation pays to send underprivileged children to one of several Tim Hortons camps and runs youth programs. This year, the organization will send more than 19,000 kids to camp, according to its website.

The foundation recently celebrated his commitment with the dedication of a Ronald V. Joyce house at its camp in his birthplace.

Joyce was awarded the Order of Canada in April 1992 for his work with the children’s camp charity.

“His commercial interests are surpassed by his dedication,” to the organization, reads the entry on the Governor General’s website, and “his fundraising efforts and personal involvement ensure that thousands of youngsters enjoy a fun-filled camping experience each year.”

Joyce also founded The Joyce Family Foundation, which focuses on providing access to education for children and youth facing significant financial need or other barriers to success. The foundation has donated more than $185 million since its start.

Joyce’s generosity “has been felt across the country,” said The Joseph Brant Hospital in Burlington, and its namesake foundation.

Joyce donated $7.5 million to support the hospital’s redevelopment and expansion.

“We have lost a great Canadian and he will be missed,” read the statement from the hospital’s CEO Eric Vandewall and the foundation’s president Anissa Hilborn.

In addition to the Order of Canada, Joyce’s philanthropy earned him numerous awards, including the title of philanthropist of the year from the Burlington Community Foundation and a Canadian Red Cross NS Power of Humanity Award.

After selling Tim Hortons, Joyce moved on to establish the Fox Harb’r Resort in Wallace, Nova Scotia, in an effort to boost tourism and employment in the province.

“He lived large and enjoyed the great journey of life,” said Steven Joyce in the family’s statement, adding the family greatly appreciates privacy at this time.

“He will be greatly missed.”