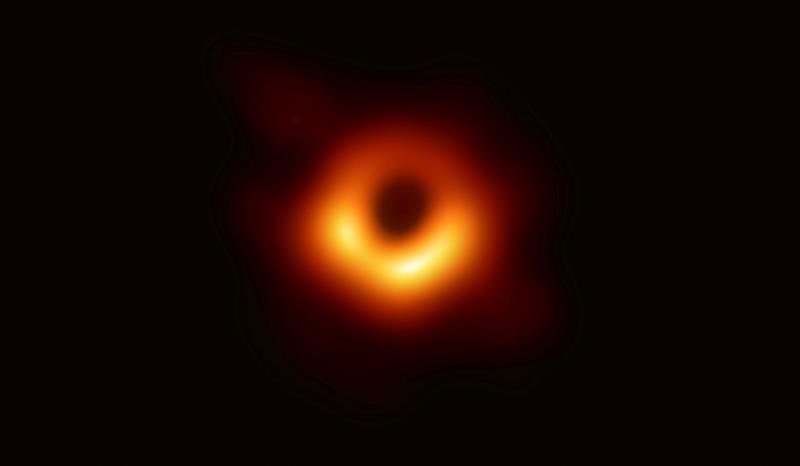 A global team of scientists that included a Canadian researcher allowed the world to “see the unseeable” on Wednesday, revealing the first ever captured image of a black hole.

The picture, depicting an orange and black ring of gravity-twisted light around the edge of an abyss, came about as a result of an international collaboration of more than 200 academics and images compiled from eight Earth-based telescopes positioned around the world.

Avery Broderick, an associate professor at Ontario’s University of Waterloo and faculty member at the Perimeter Institute for Theoretical Physics, said the image helped convert science fiction into “science fact” while bolstering theories at the core of modern physics.

“This is the first time that we’ve been able to push Einstein’s theory of gravity down to the edge of the observable universe,” Broderick told The Canadian Press in a phone interview from Washington, D.C., hours after the image was unveiled.

“Prior to that, it was an extrapolation. We had a lot of good reasons to believe Einstein, he hadn’t failed us before, but this is the first time we were able to push into that untested region.”

A black hole is a region in space where the pulling force of gravity is so strong that light is not able to escape.

Unlike smaller black holes that come from collapsed stars, supermassive black holes such as the one captured in the new image are mysterious in origin. Situated at the centre of most galaxies, including ours, they are so dense that nothing can escape their gravitational pull.

The image captured shows the hot, shadowy lip of a supermassive black hole, theorized by Einstein more than a century ago and confirmed by observations for decades. It is along this edge that light bends around itself in a cosmic funhouse effect.

The image came about through the efforts of the Event Horizon Telescope Collaboration, a global project that worked over several decades to deepen global understanding of one of science’s most extreme phenomena.

The image researchers captured is not of the black hole closest to earth, however, but of one at the centre of neighbouring galaxy Messier 87 that was easier to observe by telescope. It is about 6 billion times the mass of our sun and located about 53 million light years from Earth. One light year is equal to 9.5 trillion kilometres.

The black hole’s “event horizon” — the point of no return where light and matter begin to fall inexorably into the hole — is as big as our entire solar system.

While much of the matter around a black hole falls into a death spiral, never to be seen again, the new image captures gas and dust circling just far enough to avoid its clutches.

Researchers said the image, taken over four days in 2017 from the eight telescopes, involved incredible good luck for the scientists involved.

Astronomers had “to have the perfect weather all across the world and literally all the stars had to align,” said Jessica Dempsey, a co-discoverer and deputy director of the East Asian Observatory in Hawaii.

Dempsey said the measurements were taken at a wavelength the human eye cannot see, so the astronomers added colour to the image. They chose gold and orange, resulting in a photo that Dempsey said reminded her of the flaming Eye of Sauron from the “Lord of the Rings” trilogy.

Broderick, who said he began developing models of what black holes may look like more than a decade ago, said the real photo is “quite similar” to the predictions he and his fellow researchers put forward.

Seeing the image for the first time, he said, evoked feelings of relief, excitement and “wonder at the marvellous nature of the universe.”

He said having concrete proof of a black hole in hand opens new possibilities for future research, especially for scientists bent on bridging the knowledge gap between the physics governing the observable world and the quantum mechanics at work among the tiny particles that make up the universe.

“Black holes are the thorn in the side of unification of bringing quantum mechanics into agreement with general physics,” he said, adding the new image helps researchers develop a more thorough understanding of how they operate. “It’s entirely conceivable … that we could see something that could point the right way.”

Johns Hopkins astrophysicist Ethan Vishniac, who was not part of the discovery team but edits the Astrophysical Journal Letters where the research was published, pronounced the image “an amazing technical achievement” that “gives us a glimpse of gravity in its most extreme manifestation.”

“Pictures from computer simulations can be very pretty, but there’s literally nothing like a picture of the real universe,” he said.

— with Files from the Associated Press