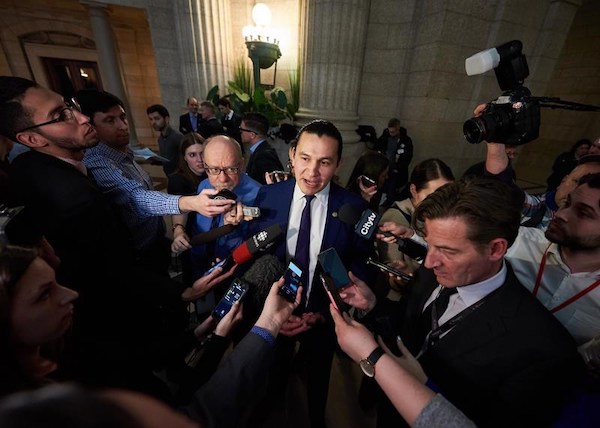 WINNIPEG — Before Wab Kinew won the Manitoba NDP leadership in 2017, opponent Steve Ashton warned that the next provincial election would inevitably focus on Kinew’s troubled past instead of policy issues.

With advertisements now ramping up in advance of the Sept. 10 vote, it appears that prediction is partially coming true.

Draft versions of upcoming NDP campaign ads were inadvertently posted online on the weekend before being pulled.

In one ad, Kinew talks about struggling with addiction as a young adult before turning his life around. In another, his wife, Lisa Monkman, describes Kinew as a changed man.

It’s unusual for an Opposition party to be playing defence this far out from an election, said one political analyst. But Kinew presents a special case because the governing Progressive Conservatives have already highlighted his legal troubles in ads of their own.

“The usual thing for an Opposition is to start out strong and begin to challenge the record of the governing party,” Paul Thomas, professor emeritus of political studies at the University of Manitoba, said Monday.

“But instead, you’re starting off the campaign trying to counter an offensive which is all about defining the leader of the official Opposition as someone who is untrustworthy, who doesn’t respect women and gets in trouble with the law. And that’s a bad position to be in at the outset.”

Kinew, 37, talked about some of his troubled past in his 2015 memoir, “The Reason You Walk,” but inconsistencies and omissions have emerged since he entered political life.

His book was upfront about an impaired driving conviction in 2003 and mentioned an assault on a taxi driver the following year — offences for which he recently received record suspensions.

But the court recording of his assault sentencing paints a darker picture than the book. Kinew made racial comments to the driver, then exited the vehicle and punched the driver in the face through an open window, said facts read into court by the Crown prosecutor.

Kinew’s book also made no mention of two charges Kinew faced of assaulting a girlfriend in 2003. Those charges were stayed by the Crown a year later. In a 2017 interview, the woman stood by her accusation that Kinew threw her across the couple’s living room, leaving her with severe rug burns.

The governing Tories are focusing many of their early pre-election ads on the discrepancies and suggesting that Kinew’s ongoing denial of the 2003 domestic violence charge remains a relevant issue.

Kinew has used advertisements, ever since becoming leader, to talk about becoming a better person and changing his ways.

The NDP have also focused their efforts on government services such as health care and education, especially a controversial decision by the Tory government to convert three of Winnipeg’s six hospital emergency rooms to facilities that offer reduced care.

But even with that kind of material to work with, Thomas said, the NDP will likely continue to address questions about Kinew.

“It’s going to be an uphill challenge for Mr. Kinew to push this aside and say, ‘it’s all negative and unfair and unwarranted,'” Thomas said.

“He has to run … ads that will address this issue and try to curtail the damage that’s done to his image and reputation. But on the other hand, he seems to be giving more profile to the issue just by running the ads.”