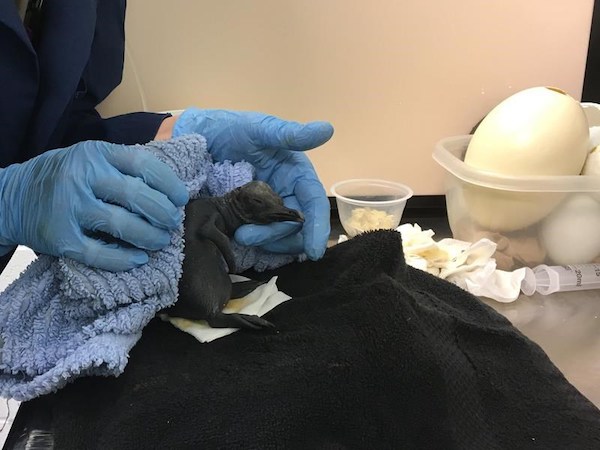 Zookeepers in Calgary have rescued an unhatched penguin chick after patching its badly-damaged shell with pieces of another egg. (THE CANADIAN PRESS/HO-Twitter, @Calgaryzoo)

CALGARY — Zookeepers in Calgary have rescued an unhatched penguin chick after patching its badly damaged shell with pieces of another egg.

The Calgary Zoo says in a news release that animal care staff noticed fragments of the king penguin’s shell inside the beach area of the birds’ habitat over the August long weekend.

The chick wasn’t expected to hatch for about another week, so the veterinary team patched the porous shell with a piece of shell from a Humboldt penguin egg from years before, and the egg was placed in an electronic egg incubator.

After a few rough days, the little chick tried to hatch by itself, piping through a small hole elsewhere in the egg.

Seeing progress was slow, the Calgary Zoo says its team gently helped break a little more of the shell and played king penguin noises to give it some encouragement.

The chick fully hatched on Wednesday, and is now being closely monitored.

“A badly broken shell so many days before hatching is very bad news,” the zoo’s news release says.

“We knew this egg contained a very special tiny king penguin chick inside … we just didn’t know how special.”

The egg was laid at the Calgary Zoo by 27-year-old king penguin Antoinette, which came to the city from the BioDome in Montreal in hopes that the penguin might finally breed in spite of its advanced age.

The zoo says Antoinette and her mate Louis are considered founders to the North American king penguin population because they have no relatives in the zoo population and have never hatched a successful chick.

To give the egg the best chance possible during its almost two-month incubation period, zoo staff placed it under an experienced penguin mom, which the zoo says happily accepted the responsibility.

But it’s breeding season in the penguin colony at the moment, and zoo spokeswoman Alison Archambault says eggs can sometimes be in danger.

“Everyone is paying attention to everyone else’s eggs,” Archambault says. “There’s some egg stealing. There’s a lot of activity going on.”

The zoo says that having a chick with new genetics is important to the king penguin species survival plan.

After hatching, the chick was cleaned, given fluids and antibiotics to help fight infection and was returned to the care of the foster mother.

“Since this new chick had such a difficult start to life, the zookeepers and veterinarians continue to treat and closely monitor its health and well-being,” the zoo says.

“While the next few weeks will be extremely critical for our littlest king penguin, we remain hopeful.”