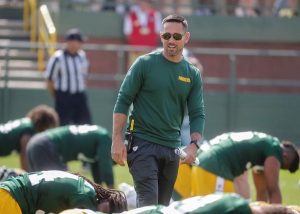 WINNIPEG — Wade Miller wants to make sure football fans enjoy Thursday’s NFL pre-season game in Winnipeg between the Oakland Raiders and Green Bay Packers, even if they can’t afford to be in the stands.

The president and CEO of the Winnipeg Blue Bombers said the CFL team and the Raiders are hosting a viewing party downtown so fans can watch the Week 3 exhibition contest live-streamed from IG Field, home of the Bombers.

“Based on the price of these tickets, there was going to be a lot of fans who wouldn’t be able to afford to come to the game and we wanted to make sure that our season-ticket members and football fans in the entire community had a place to gather and have a great event,” Miller told The Canadian Press on Wednesday.

“We think it’s a great opportunity to engage the entire community of Winnipeg.”

The game will be shown on a jumbo screen at The Forks, a downtown tourist attraction. There will be food and activities with the cost of a cash or food donation to the Winnipeg Harvest charity.

Ticket prices for the game were controversial since the event was announced in June.

Prices were set by promoter John Graham, president of Canadian-based On Ice Entertainment Ltd., and the Raiders. Oakland gets the gate revenue.

“We rented out the venue,” Miller said. “Those (prices) are decisions made by the promoter. We can’t control those, but what we can control is putting on a good event down at The Forks and making sure the stadium looks great.”

“I’m sure there will be around 20,000 here,” he said. “The ticket sales are what they are and we can’t control that. At the end of the day, it’s still a pre-season game and that is what it is.”

Although starters traditionally get the most playing time in a Week 3 exhibition game, that may not happen Thursday.

The 15-year veteran hasn’t yet played in the pre-season. He was held out of last week’s loss to the Baltimore Ravens because of tightness in his back.

“I’ve never been to Winnipeg, but I’m sure there’s some Packers fans up there,” Rodgers told reporters after a practice this week.

It’s the first time Green Bay has played a neutral-site exhibition game since it faced the Kansas City Chiefs in a Hall of Fame game in Canton, Ohio, in 2003.

Oakland, which is moving to Las Vegas next season, may not have starting quarterback Derek Carr take any snaps, nor new receiver Antonio Brown catching passes.

Raiders head coach Jon Gruden told media after Tuesday’s practice that it depends “on the health of a team, who’s in and who’s out.”

Brown is recovering from frostbitten feet he suffered during cryotherapy in France last month. He’s also testing new helmets after he recently lost a grievance to wear his old, uncertified helmet.

At the press conference announcing the game, Graham said he was hopeful Oakland (2-0) and Green Bay (1-1) would hit the field in Winnipeg before the game for a practice or walk-through. That didn’t happen. Also, no announcement has been made about the halftime show.

However, Miller said the community has been drawn into the event.

The Bombers and Raiders put on a seven-on-seven football competition at IG Field last month. Winners from three age groups received tickets to the game and there was a draw for more.

Thirty youth and members from northern Manitoba First Nations are also being flown in to attend the game.

He added amateur football players will hold the Canadian and American flags at the game and some will line the teams’ tunnels when players come onto the field, which has been converted to the smaller NFL size.

“Our operations staff have done an amazing job in turning our field from football to soccer, now to an NFL field,” Miller said. “Our team’s working really hard here to make sure our city shows well and it will, and IG Field will, too.”

It’s the first NFL contest in Canada since the Buffalo Bills completed a run of eight games in Toronto with a regular-season clash against the Atlanta Falcons in December 2013.