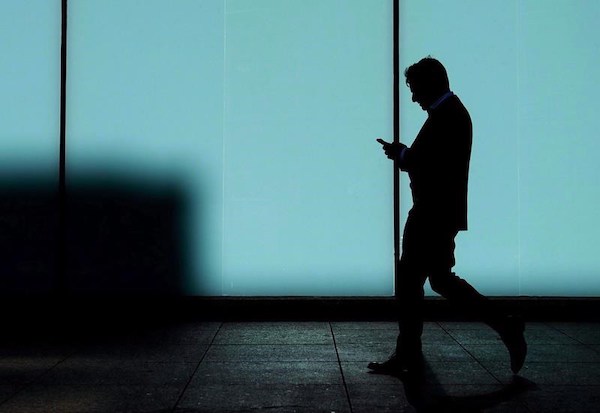 A man walks and texts on his smart phone in downtown Toronto on Monday, October 30, 2017. (THE CANADIAN PRESS/Nathan Denette)

OTTAWA — Consumer advocates say a rare consensus is forming among the major political parties ahead of the federal election that Canadians need protecting from gouging by the country’s big telecom companies.

It’s being called phone-bill populism, and it could be a make-or-break issue for the parties as they head toward the Oct. 21 vote.

Allan Thompson hears about it constantly as he knocks on doors in communities across the Ontario riding of Huron-Bruce, where he’s running as a Liberal candidate.

Seniors are most likely to raise the issue, Thompson says, as they give him an earful about the ever-rising cost of living in general.

“But then (seniors) are also the most likely to be at home when I knock,” he said.

Even before the official campaigning begins, all the major parties are pledging to find ways of curbing increases to telecom rates.

The New Democrats under Jagmeet Singh laid out their plan for reducing wireless and internet-service rates, announcing in June they would impose a “price cap” on monthly bills that they estimated will save households about $10 a month for each service.

The NDP plan would see rates matched to an average across the 36 countries that make up the Organization for Economic Co-operation and Development (OECD), the party said.

Recent media reports have indicated the Trudeau Liberals are preparing a campaign pledge to reduce cellphone and internet costs either through a cap on monthly bills or by requiring major service providers to offer mobile virtual-network operators (MVNOs) wholesale access to their infrastructure. Those are smaller companies that don’t own wireless networks but pay bigger companies for the right to use theirs, re-selling that access under their own brands.

Trudeau himself has acknowledged telecom services in Canada are costly and has vowed to do something about it.

“We recognize that Canadians shouldn’t be paying more for their already very expensive internet and communication services and that’s something that we will take into account as we move forward to ensure that the system is fair for everyone,” Trudeau said last Monday at the close of the G7 summit in France, when asked about the possibility of taxing digital services.

The Conservatives under leader Andrew Scheer have criticized the Liberals for being ineffective on the subject, noting the prime minister has had plenty of time to reduce end user rates since coming to power in 2015.

“Justin Trudeau and the Liberals have been in power for four years, and have done nothing to make life more affordable for Canadian families,” Scheer’s press secretary Daniel Schow said in an emailed statement.

The Tories, however, have not laid out their own plan to deal with a rising household cost, choosing instead to wait until the campaign begins.

“We will have more to say about our plan to make life more affordable and to help Canadian families get ahead in the coming weeks,” Schow said.

Industry players warn that attempts at rate-fixing could result in reduced investment in critical infrastructure, particularly as Canada heads toward development of 5G networks across the country.

Canada’s telecom industry group, the Canadian Wireless Telecommunications Association (CWTA), argues that the high costs Canadians pay for services have been necessary to help build one of the fastest, most reliable cellphone and internet infrastructures in the world.

“Our members want to continue to build out to ensure that more Canadians get connected, and that we have world-class networks and that we are ready for 5G, because the 5G economy is going to be the future for those countries that are able to get there and deliver those networks,” CWTA president Robert Ghiz — a former premier of Prince Edward Island — said in an interview.

“That will lead to GDP growth and will make sure that Canada can remain competitive.”

If rates for internet, cellphone and other telecom services are a political football, that’s the fault of the service providers, says consumer-rights advocate John Lawford of the Public Interest Advocacy Centre.

“The companies have done nothing to take themselves off the radar of the political parties,” said Lawford.

“Low-income Canadians are spending, according to the (Canadian Radio-television and Telecommunications Commission) and Statistics Canada, about 10 per cent of their income on communications services,” he added.

“That’s double what it should be.”

“Big telecom has been gouging people in Canada for far too long and change is long overdue,” OpenMedia campaigns director Matthew Carroll said in a statement.

OpenMedia has called on the government to require major service providers to offer wholesale access to MVNOs, which pay fees to piggyback on the infrastructure built by the big telecom players.

The CRTC is reviewing the rules governing Canada’s wireless market to determine whether MVNOs should have greater access to established networks.

Where that has happened in other markets, particularly in Europe and Israel, the result has been less money spent on improving networks, said Ghiz.

“They’ve allowed MVNOs to come in and they have mandated prices around wireless. Quite frankly when that happens there’s less investment,” he said.

“Your download speeds go down, your coverage goes down and the opportunity to invest to ensure more Canadians get connected goes down as well. We don’t want to see that happen.”