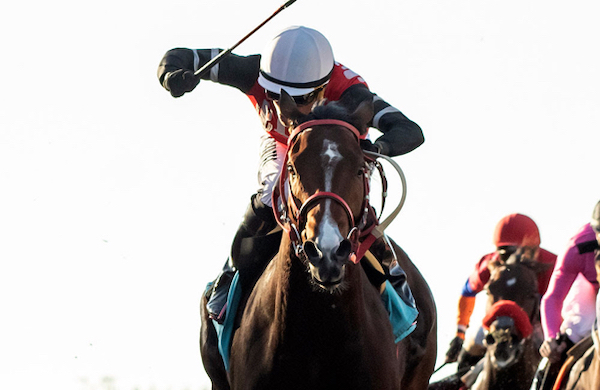 Manitoba’s marvelous mare, Escape Clause, will head back out onto the track this Saturday in what will be her owners’ most important day at the races.

In fact, according to trainer Don Schnell: “We need to get into the Winner’s Circle.”

On Saturday afternoon at about 3:41 CDT, Escape Clause will break from the starting date in the $200,000 Grade III Locust Grove Stakes over one mile and one-sixteenth at Churchill Downs in Louisville.

It’s an important date for Escape Clause who actually has to do the work, but it’s more important for her owners — trainer Don Schnell, Barry Arnason and True North. Together, they turned down a $600,000 US offer to purchase the five-year-old mare and instead decided to put her up for auction on Nov. 4, hoping to cash in more than $1 million US.

However, after winning the Harry Henson Handicap at Sunland Park back on March 24, Escape Clause has failed to win. Granted, she’s raced against some of the finest mares on the continent, two of which, Elate and Midnight Bisou are currently co-favourites in the Breeder’s Cup Distaff. However, she finished second at the Apple Blossom Stakes at Oaklawn Park, fourth at the Ogden Phipps Stakes at Belmont, second at the Delaware Handicap at Delaware Park and third at the Lady Jacqueline Stakes at Thistledown outside Cleveland. She has two wins in seven starts this year and really needs a win on Saturday. She has won $856,500 US in her career ($1,156,275 CDN) and if she is to command $1 million at auction she needs another win.

And Saturday’s race will be no afternoon jaunt in the pasture. She’s up against Mylady Curlin, the four-year-old mare whop beat her handily at Thisledown and a two-time Stakes winner this year who just won the $125,000 Groupie Doll Stakes at Ellis Park, the four-year-old Kentucky-bred Go Google Yourself.

To be fair, however, there was some concern that she had a virus back on Aug. 17 when she ran sluggishly in the Lady Jacqueline Stakes and this week, after a blood test, she was given a clean bill of health. She’s had a workout that made jockey Tyler Baze happy, so there are high hopes for Saturday’s race at Churchill, one of the most storied tracks on the planet.

With a win on Saturday — at the 13th different track of her career — Escape Clause, bred in Russell, Man., by Cam Ziprick and Arnason Farms should fetch a pretty penny at the Fasig-Tipton “Night of the Stars,” Auction right after the Breeder’s Cup.

Meanwhile, Escape Clause’s sister Hidden Grace will leave Assiniboia Downs and race again on Oct. 26, at Century Downs in Calgary in the $50,000 CTHS Sales Stakes. It’s a race Escape Clause won in 2017 and 2018.

If Escape Clause wins on Saturday, there will be a longer Crazy Hour in the ASD Clubhouse. And don’t forget, the final Night Market and Festival of the year — featuring Paw Patrol — starts Saturday at 3 p.m. on the grounds at Assiniboia Downs.