By Dean Bennett, The Canadian Press 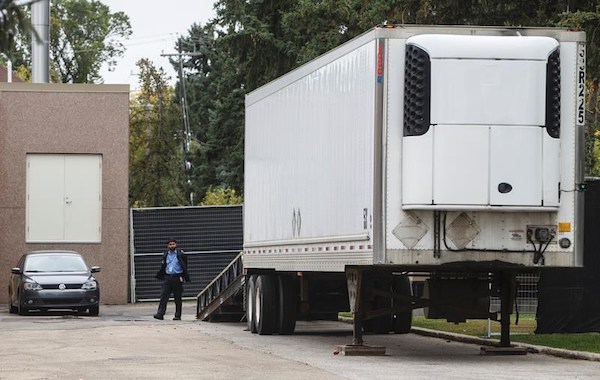 A security guard keeps an eye on a trailer where bodies were reportedly stored in a rented trailer as medical examiner copes with space shortage in Edmonton Alta, on Wednesday, September 11, 2019. (THE CANADIAN PRESS/Jason Franson)

EDMONTON — The Alberta government has made changes and apologized to the families involved after video was aired of a deceased person in a body bag being manhandled outside the medical examiner’s office.

“It is a continuous expectation of the Office of the Chief Medical Examiner that dignity and respect is shown to the deceased in its care,” Justice Department spokesman Dan Laville said Wednesday in a statement.

“Unfortunately, these high standards were not reflected this week, when a deceased was transferred from a temporary storage unit to a gurney for transport in a disrespectful manner.

“We extend our apologies to all families who entrust their loved ones to us.”

The investigation follows a CBC story and accompanying video showing a purported funeral home employee dragging and tugging on a body bag to get it off the truck beside a busy commuter road near the medical examiner’s office in Edmonton.

The CBC also reported that internal medical examiner office emails say the refrigerated trailer was brought in last week to handle a sudden spike in bodies.

Justice Minister Doug Schweitzer has ordered an investigation. Laville said that probe is ongoing, but that immediate changes have already been made.

There is now a ramp on the back to ensure smooth transition to get the bodies off the trailer. A screen is now in place for more privacy and to prevent the trailer from being seen by drivers on the nearby road.

Schweitzer, in a statement, added that he has been assured by the chief medical examiner that steps are being taken to ensure bodies are treated properly.

“Like all Albertans, I was very disturbed by what I saw in the video,” Schweitzer said.

“All Albertans, living or deceased, have the right to be treated with dignity and any disrespect for the deceased or their loved ones is not reflective of our values.”

Laville said the department is also working with medical examiner staff and funeral home operators to ensure that procedures regarding respectful transport of bodies are followed.

“What is clear is that our standards and expectation for moving the deceased were not adequately understood by those involved,” wrote Laville.

Earlier Wednesday, Opposition NDP critic David Shepherd agreed the government needs to get some answers, but said an immediate apology was in order.

“These are people’s loved ones, their family. And when they are giving them over into government care, that is with the trust that they’re going to be handled with dignity and with respect,” Shepherd said.

“What I saw on that video was frankly, I think, a betrayal of that trust.”