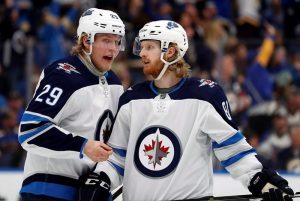 The two-year bridge deal Laine signed with the Winnipeg Jets last Friday gives him the opportunity to increase his value on his next contract.

“I know that I will be good for the next two years,” said the Finnish sharp-shooter, whose US$13.5-million contract pays him $6 million this season and $7.5 million next season.

“I’m going to score a lot of goals, that’s for sure. I’ve always trusted myself and this is no exception. I’m going to be betting on myself in these two years. It was still a good deal for both sides.”

Laine and fellow forward Kyle Connor, who signed a seven-year contract with the club on Saturday, spoke to reporters Monday for the first time since inking their respective deals.

“I can’t wait for him to do those kind of things, but that’s insert name here,” Cheveldayoff said. “That’s with every single player. The best problem I can ever have is a challenge to try and fit people into a cap.

“When you’ve got good players, that’s awesome to have. We hope and certainly expect for him to continue on the great trajectory that he’s had.”

Laine had played with back problems last season and said he’s “100 per cent” healthy and committed to improving his overall game.

He revealed he tried a different approach during the off-season and began skating earlier than usual in July.

“I’ve been skating a lot now, more than I’ve done in the past so, hopefully, I’ll see something new on the ice and how that goes for me,” said Laine, who spent some time with a pro team in Switzerland while waiting on a new contract.

He and Connor underwent medical testing Monday morning and skated on their own as their teammates had the day off. They’ll join them for practice Tuesday and find out where they slot in for the season opener on Thursday in New York against the Rangers after missing most of training camp.

Connor, 22, was smiling more than usual as he discussed the seven-year, $49.98-million contract he signed late last Saturday. It carries an annual average value of $7.14 million.

“I’m ready to go, ready to play and I feel good,” said Connor, who kept in shape with the University of Michigan team.

“Wherever (head coach Paul Maurice) puts me, that’s where I’m going to play.”

Connor had spent most of last season on Winnipeg’s top line with Scheifele and right-winger Blake Wheeler. Nikolaj Ehlers was in that spot for some of the pre-season.

Connor declined to answer whether he and his agent were presented with an offer sheet by another club, saying, “It’s part of the business. I can’t really go into that.”

He thanked the Jets for the “belief and commitment” they showed with the lengthy contract.

“Long term was definitely my preference,” Connor said. “I wanted to be here. I love this team and the way it’s going and this whole organization.”

While Connor was quiet during his negotiations, Laine made some comments about playing partners to a Finnish reporter that were viewed as a possible insult to his often-regular centre Bryan Little. Laine ended up talking to Little on the phone and apologized.

“I’m not going to try to explain it here,” Laine said. “That’s something that happened and there were things I didn’t say and there were some wrong conclusions. I didn’t mention anybody by name.”

Cheveldayoff had no update on Little, who was injured and left Sunday’s 5-4 overtime exhibition win over Minnesota.

He also didn’t have any news about veteran defenceman Dustin Byfuglien, who was granted a personal leave of absence the day before training camp opened to reportedly ponder retirement.

Cheveldayoff said he spoke to Byfuglien a couple of days ago and the situation remains “status quo.”