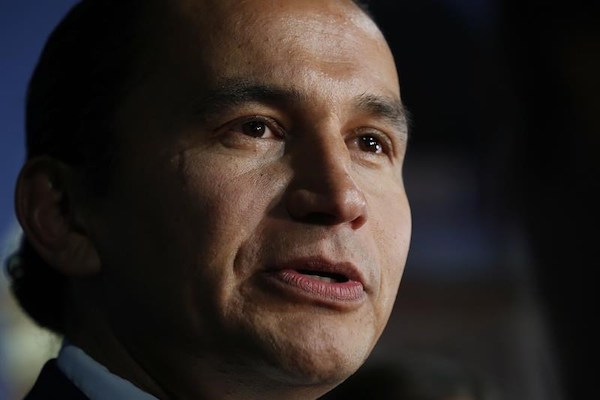 NDP Leader Wab Kinew is shown at a leaders’ debate at CBC in Winnipeg, Wednesday, August 28, 2019. (THE CANADIAN PRESS/John Woods)

WINNIPEG — Leadership reviews in Manitoba politics are rare, but 2020 will see members of two parties vote on whether their respective leaders should get to keep their jobs.

NDP Leader Wab Kinew and Dougald Lamont of the Liberals will each have to get at least 50 per cent support when party members are asked whether to open up the leadership to other contenders.

The last such review in Manitoba was in 2005, when 45 per cent of Progressive Conservative members voted to open up the party’s top job held at the time by Stuart Murray. He survived a vote with 55 per cent support, but Murray decided it was not strong enough to stay on and he stepped down.

In 1983, federal Tory leader Joe Clark decided that 67 per cent support was not a clear enough win. He called for a leadership race despite the vote and lost to Brian Mulroney.

Kinew, in a year-end interview with The Canadian Press, would not say what number he would consider a minimum to stay on, but he appeared fairly confident of his support.

Royce Koop, head of political studies at the University of Manitoba, said he feels Kinew’s job is secure, given that Kinew was only elected leader in 2017 and the party increased its seat total in last September’s election to 18 of 57 in the legislature.

“My sense is that there’s a lot of good will towards him because of that.”

New Democrats may also be averse to forcing yet another leadership race following divisive contests in 2015 and 2017, Koop added.

“There’s less of the … fighting and squabbling that we’ve seen in the past.”

The outcome for Lamont may be less predictable. The Liberals lost one seat in the last election and now hold three — not enough for official party status and the funding that comes with it. Lamont’s predecessor, Rana Bokhari, resigned after getting a similar result.

Koop said there appears to be no public push for Lamont to go. But because the Liberals are a small party with far fewer members than the NDP and Tories, a surprise leadership challenge would not be hard to mount.

“It only takes one well-organized person to … kind of stack the meeting or whatever and then get a bad result on the vote.”

The two people Lamont defeated in 2017 — Jon Gerrard and Cindy Lamoureux — sit in caucus. Gerrard led the party for more than a decade before being pressured to quit in 2011 and deciding six years later to give it another shot.

Like Kinew, Lamont would not say what he would consider a minimum to feel comfortable staying on. He also expressed confidence.

“I won’t ever say that I’m perfect, but I’m not particularly worried about a challenge.”

Lamont said he and other party officials are still working on the wording of the leadership vote.

“We just have to get the question right, so we don’t accidentally write it the wrong way,” he said.

“Would you like a leadership convention? Oh sure, why not. It’s like — hold on a second, we have to be more specific about this.”

Aside from the votes on their future, Lamont and Kinew say they will work in 2020 to better organize and finance their parties. The governing Progressive Conservatives have been raising exponentially more money than the opposition in recent years.

The Liberals did not draw on any loans for the 2019 election, Lamont said, so are already starting toward the next campaign free of debt.

The New Democrats took on some debt, Kinew said, but also raised more money than in the 2016 election.

“We’re in pretty good shape … People will be impressed when they see our year-end numbers.”