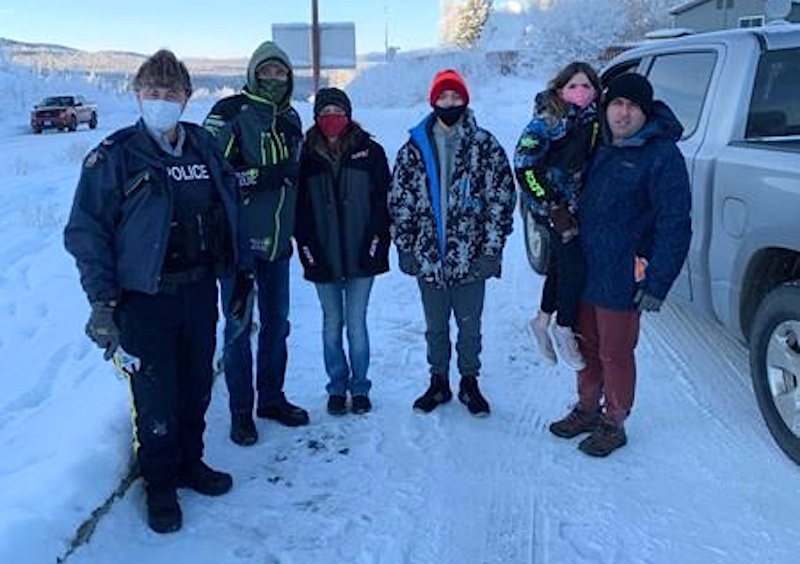 A woman from Georgia says her family’s reunion was saved by a man from British Columbia who drove them to the Alaskan border after they got stranded in a snowstorm and appealed for help.

Lynn Marchessault began her trip with her two children, two dogs and a cat on Nov. 10 from Georgia to the Alaska border to join her husband, who serves in the U.S. military.

“I had never driven in the snow,” she said in an interview on Monday.

“It was like a whiteout kind of snowstorm. I wasn’t really familiar with that, or even knew what it was called until this day.”

The family’s pickup truck was pulling a U-Haul and did not have the appropriate winter tires to get through the winding, mountainous roads when they stopped at a highway lodge for temporary workers in Pink Mountain, B.C., on Nov. 17.

She began looking for someone passing through the area who could drive them when Gary Bath, a Canadian ranger and military veteran, stepped up to the wheel.

Marchessault said she and her husband talked to Bath and his family on the phone before they embarked on the rest of their trip.

“I felt good about it from the beginning, like I knew these were good people and that it was a good choice to make,” she said.

Marchessault said her trip was supposed to have taken place about two months ago but it got delayed by COVID-19, adding that she was “naive” about the road conditions.

Bath, who lives in Fort St. John, said he wanted to help the family be together for Christmas, and he was doing something nice for fellow service members.

“A little bit like Santa Claus in this case,” he said with a chuckle.

Marchessault said the 1,700-kilometre drive to the Alaskan border near Beaver Creek, Yukon, is “not a road for the faint of heart.”

“Oh my goodness, beautiful views, amazing views, but some of those parts of the road were a little bit scary for me,” she said laughing.

“I mean, Gary’s just over there driving like a champ, you know, been doing it his whole life. But for me, I was like ‘Oh my goodness.’ Sometimes I would tell him I have enough anxiety and sweaty palms over here in this seat for the both of us and then he would just kind of chuckle.”

Bath said the two-day trip was “quite windy and really bumpy” but “not too bad.”

The two families hope to meet up soon.

“I’m so glad that the whole thing was over, but it was so hard to say goodbye to Gary and leave him,” Marchessault said.

“We really bonded. I think we’ve become good friends. He’s a great and grand guy and his wife is pretty awesome.”