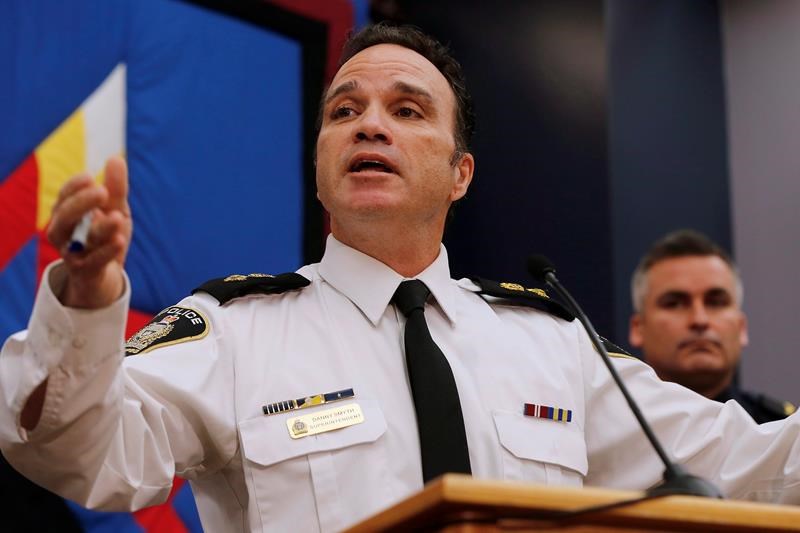 Winnipeg’s police chief says an officer who gave a ticket to a couple who questioned why he wasn’t wearing a mask during a traffic stop acted inappropriately.

“We’ve been very clear with our officers that we expect them to wear their protective masks when they are dealing with the public,” Danny Smyth said Thursday.

The vehicle was pulled over Tuesday evening for not moving into a far lane while passing the officer’s police car when the cruiser was stopped with its emergency lights on.

A woman who was a passenger in the vehicle recorded a video while the officer gave the driver a warning about the infraction.

The woman, who has asked not to be identified for fear of retribution, said her boyfriend was driving them to a grocery store after they had both finished a long day working at local hospitals.

When they were pulled over, she said her boyfriend accepted the officer’s warning about driving too close to the cruiser. But she was concerned because the officer was not wearing a mask and was leaning in near the vehicle’s open window.

“I just have a question,” the woman asks in the video posted on social media.

“Why are you not wearing a mask and you are yelling?

In the video, the officer says he’s not within six feet of the couple and is standing outside. The officer then says, “You know what? If you want to do it that way, I will just write a ticket.”

A 28-minute version of the video shows the officer return to the vehicle wearing a mask. He hands the driver a $298-ticket.

“Since it bothers you, now I’ve put one on. But he’s getting a ticket,” the officer says.

The police chief said the reason the driver was originally stopped is a serious one. The officer was shaken by the vehicle driving so close to his cruiser before the encounter on camera, Smyth said.

The officer’s subsequent behaviour with the couple was inappropriate, Smyth said. He has directed the force’s professional standards unit to review what happened.

In a news release Wednesday, police said the traffic stop had also been flagged for Manitoba Prosecutions and attempts were being made to speak with the driver who got the ticket.

The woman said neither she nor her boyfriend have yet been contacted by police or any other agency about the traffic stop.

She said she recorded the video because she was concerned by the officer’s confrontational attitude. A  family member later posted it online.

The woman said she understands tensions are high during the pandemic. But she also sees the strain of COVID-19 on the health-care system during her 12-hour hospital shifts and knows how important wearing a mask is.

She doesn’t want the officer to lose his job, she said, but she hopes he gets training about dealing with the public and mask usage.

“I want him to realize what happened is not right. Abuse of power is not good when dealing with citizens.”