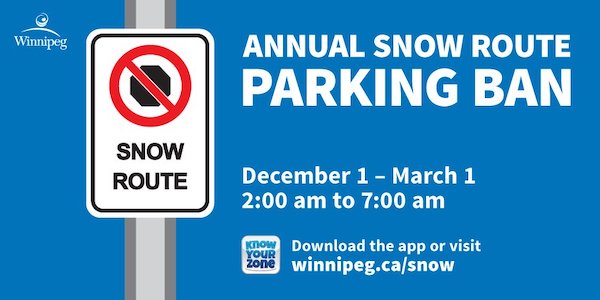 The City of Winnipeg has lifted its extended snow route parking ban that was put into effect earlier this week.

After the city received between 10-15 centimetres of snow on Monday, the ban was extended from 12 a.m. to 7 a.m. to allow crews to clear regional streets.

The ban, which is usually in effect from 2 a.m. to 7 a.m., prevents parking on any street designated as a snow route until March 1, 2021.

Updated information on the city’s snow-clearing operation and winter parking bans can be found at Winnipeg.ca.

← Previous: Goodbye 2020: A Look at Lessons Learned, Communities Forged in a Year Like No Other Next: Winnipeg Santa Claus Parade Launches Children's Special →
Tags: City of Winnipeg | Parking | Snow | Weather