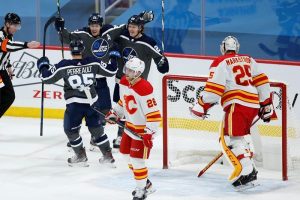 WINNIPEG — It was a historic win for Connor Hellebuyck.

The 27-year-old American stopped 23 shots to lead Winnipeg past the Calgary Flames 4-1 on Thursday night. The win was the 153rd for Hellebuyck, moving past Ondrej Pavelec (152) for the most in Jets/Atlanta Thrashers history.

“At this moment it means a lot,” said Hellebuyck, a 2012 fifth-round pick by Winnipeg. “I care a lot about this organization, they’ve given me my shot.

“I care a lot about the guys in front of me. It’s a testament to all the guys I’ve played with. It’s really exciting and I’m really glad I get to share it with these guys. A lot of these guys have been with me from the beginning. I’m looking forward to the future now.”

The six-foot-four, 207-pound Hellebuyck is in his sixth season with the Jets. Last September, he captured the Vezina Trophy as the NHL’s top goaltender.

Hellebuyck had a chance to set the record Monday night but Winnipeg dropped a 4-3 shootout loss to Calgary, an outcome that upset the goalie. Backup Laurent Brossoit was in goal for the Jets’ 3-2 victory over the Flames on Tuesday night.

“He’s a competitor, he wants to win every night and we appreciate that,” said Jets forward Adam Lowry said of Hellebuyck. “He’s the backbone of our team.

“To give him, not necessarily an easier night because he did make some big saves . . . when the game was tight but a game where he’s not having to face 35-40 shots it certainly, I think, makes life easier for a goalie. To see him get that franchise record, it’s certainly well earned.”

Mason Appleton score twice for Winnipeg (7-3-1). His second goal of the game and third of the season into the empty net at 18:38 of the third cemented the victory.

Kyle Connor and Mark Scheifele had the others for Winnipeg, which erased a 1-0 deficit with three second-period goals.

Flames forward Sam Bennett was a healthy scratch. On Saturday, his agent, Darren Ferris, said Bennett wants to be traded.

Bennett, who has played both centre and right-wing over his six NHL seasons, has one assist this year. Calgary selected Bennett fourth overall in the 2014 entry draft.

Calgary outshot Winnipeg 11-10 in the first but mustered just 13 shots (seven in the second, six in the third) the rest of the way. The Jets finished a seven-game homestand with a 4-2-1 record.

“You could see that we were getting better,” Hellebuyck said. “We didn’t expand our game, we stuck to our role and got into the dirty parts of the game.

“We got pucks out and we blocked shots. It adds up and it makes a difference and frustrates teams. There was no one going lone wolf tonight, it was everyone on the same page.”

Mangiapane had the lone goal of the first, tipping a shot from the point for his second of the season at 19:04. It marked just the second time in eight games that Calgary registered the first goal in a contest.

Appleton made it 1-1 at 3:31 of the second. Nikolaj Ehlers nearly put Winnipeg ahead at about the six-minute mark alone in front on a Calgary turnover but Flames goaltender Jacob Markstrom made the brilliant stop.

Connor put Winnipeg ahead 2-1, scoring his team-leading seventh of the season unassisted on a breakaway at 13:59. Scheifele made it 3-1 with his fifth with 51 seconds remaining in the frame.

The Jets are scheduled to be off the next two days before returning to practice Sunday. And that’s when forward Pierre-Luc Dubois is set to come out of quarantine.

Winnipeg acquired Dubois and a 2022 third-round pick from Columbus last month in a deal that sent Patrik Laine and Jack Roslovic to the Blue Jackets. The six-foot-two, 205-pound forward will be able to practise two days with his new team before Jets play next in Calgary on Tuesday.

“We’re really looking forward to another big body down the middle,” Lowry said. “It gives us some depth and will really allow us to kind of continue to wear teams down.

“Over the course of these three-game series our size down the middle, our size up front wears down on the defence . . . I think he’s going to add that. He’s a terrific two-way player.”