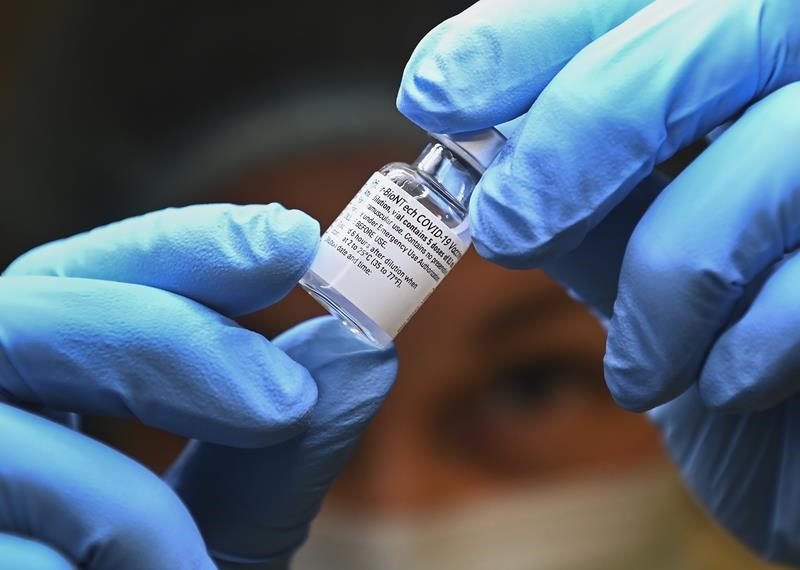 OTTAWA — The Public Health Agency of Canada expects to spend up to $5 billion on vaccines and other COVID-19 treatments.

Federal budget documents show $5.3 billion was approved in December for COVID-19 vaccines and treatments, including the purchase of doses, and research and development.

Last month, $5 billion of that was shifted from the current fiscal year into 2021-22.

The Public Health Agency of Canada told The Canadian Press this is to “ensure continuity of funding to match the timing for payments as vaccines are delivered.”

Only 6.5 million of the more than 240 million COVID-19 vaccine doses Canada is guaranteed to buy will be delivered before the end of March.

The price Canada is paying for vaccines has been shrouded in mystery, as contracts with suppliers are covered by confidentiality clauses that prohibit the federal government from saying how much it is spending on every dose.

Procurement Minister Anita Anand said in September that Canada had allocated $1 billion for vaccines after signing deals with five companies for 154 million guaranteed doses, as well as options to add another 108 million after more was known about how the vaccines worked.

Another $220 million was allocated to buy up to 15 million doses from COVAX, the international vaccine-sharing program.

Soon after Canada added 20 million doses from Oxford-AstraZeneca and another 20 million from Medicago, which is the sole Canadian company in the mix. Neither were included in the original $1 billion.

Canada has also since doubled its order from Pfizer-BioNTech to 40 million doses, bumped its Moderna order from 20 million doses to 44 million, and purchased another two million doses of the Oxford-AstraZeneca vaccine produced at the Serum Institute of India.

The first 500,000 of those doses from India arrived in Canada Wednesday morning. Canada has also received more than two million doses from Pfizer-BioNTech and about 630,000 doses from Moderna.

No other vaccines have been approved, though Dr. Supriya Sharma, the chief medical adviser at Health Canada, said she anticipates Johnson and Johnson’s vaccine will be authorized by the middle of March.

Anand said last week she hoped to provide an updated figure soon on how much Canada is spending on vaccines.

“We are continuing to make sure that we have the most accurate number possible before providing that to the Canadian public,” she said Feb. 26.

The federal public health agency has not said specifically how much of the $5 billion is going to vaccines versus other COVID-19 medications.

Some information on the cost per dose has been released or leaked in both the United States and Europe. The U.S. is believed to be paying, adjusted to Canadian dollars, $40 a dose for Moderna, $25 for Pfizer-BioNTech, $4 or $5 for Oxford-AstraZeneca, $12 for Johnson and Johnson and $20 for Novavax.

Europe’s prices, inadvertently leaked by a Belgian politician on Twitter, included, in Canadian dollars, $3 for Oxford-AstraZeneca, $13 for Johnson and Johnson, $18 for Pfizer, and $27 for Moderna.

Both the United States and Europe invested directly in the research and development of many of those vaccines, and it’s not clear how much that may affect their price per dose. Anand said Canada paid a “fair-market” price for all the vaccines it ordered.