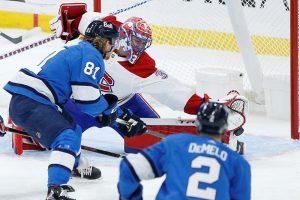 WINNIPEG — Nikolaj Ehlers knows he had a lot of help in securing an overtime win for the Winnipeg Jets on Wednesday.

Just under a minute into overtime, Jets goalie Connor Hellebuyck made a giant save on Montreal Canadiens defenceman Jeff Petry.

Winnipeg came away with the puck and Ehlers streaked down the ice, firing a shot from the top of the hash marks through the legs of Habs netminder Carey Price to seal a 4-3 OT victory for the Jets.

“I already said thank you to (Hellebuyck). He saved me a little there,” said Ehlers, who also had an assist in regulation.

“But that’s 3-on-3 right there. You get a big chance one way and it either ends up in the net or it’s going the other way for a big chance. Luckily, it went the right way for us tonight.”

Winnipeg (18-9-2) struck early on Wednesday with Blake Wheeler burying the first shot of the game 50 seconds into the first period.

The early goal gave the Jets the jump they needed, Ehlers said.

“You wish you could start every single game like that,” he said. “A start like that just shows that our leader, our captain, was ready to go. That got us going right off the start and I think that we kept that going throughout the game.”

Kyle Connor added a pair of goals and Pierre-Luc Dubois contributed three assists for the Jets, who were coming off a 4-2 loss to the Canadiens on Monday.

Winnipeg has yet to lose two games in a row in regulation this season.

The stat is a testament to the character in the Jets locker room, Connor said.

Winnipeg had a 3-1 advantage heading into the final frame Wednesday. Brendan Gallagher cut the lead in half 5:58 into the third and Tyler Toffoli forced overtime with 85 seconds left on the clock.

Jets coach Paul Maurice said his team has traditionally been strong in third this season, but didn’t move the puck well in the closing period on Wednesday.

“We’ll take the two points. We found a way to win,” he said. “You don’t like to give up the two goals the way we did. But you find that desperation in all these games.”

Toffoli snuck behind the Jets net, accepted a pass from Corey Perry and slammed it in behind Hellebuyck before anyone in a Winnipeg jersey registered his presence.

Teams aren’t always going to play their best, but the Canadiens need to find ways to claw out wins, Gallagher said.

“The games where you’re struggling a little bit, we’ve just got to play smarter,” said the right-winger who also notched an assist on Wednesday. “We probably just made some mistakes and if we just simplified our game, gave ourselves some time to get into it, maybe we don’t have to come back from two goals.”

The Canadiens have not won in overtime or a shootout this season.

Coach Dominque Ducharme said his squad looked poised to change that on Wednesday before Ehlers put away the game-winning goal.

“We were just on the verge to build something even stronger there with the change and fresh guys and attacking guys that are tired. I thought we attacked at the right time,” he said.

Despite the final results, Ducharme said pushing for overtime shows that his group is in every game they play.

“Obviously we want to win every game. And we want to take those situations,” he said.

“You want to take those chances and get the extra point, for sure. And I think our guys realize where we panic at times and where we get impatient and where we open the door to the other team instead of keeping control.”

The Jets open a seven-game road trip Thursday in Edmonton. The Canadiens are heading back to Montreal where they’ll host the Canucks on Friday.

NOTES: Both teams were 0 for 2 on the power play. … Wednesday marked the final outing in a six-game road trip for the Canadiens. … Montreal centre Nick Suzuki played his 100th NHL game.