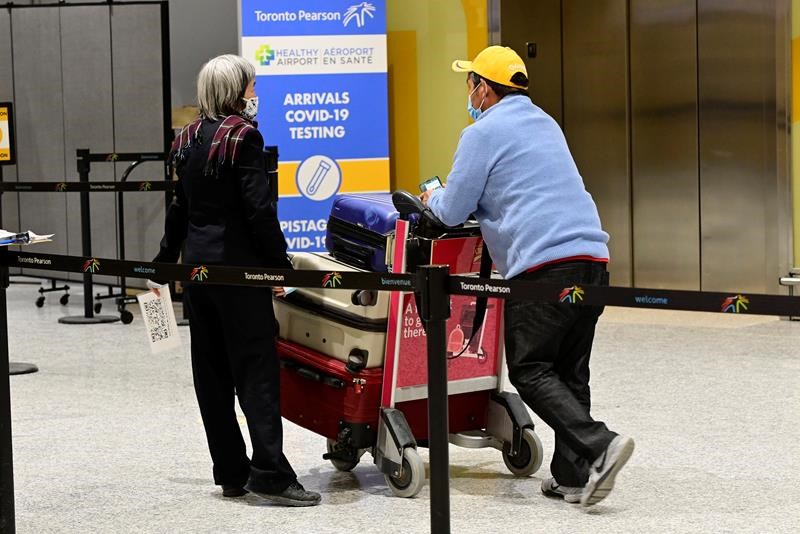 Travellers, who are not affected by new quarantine rules, arrive at Terminal 3 at Pearson Airport in Toronto early Monday, February 22, 2021. (THE CANADIAN PRESS/Frank Gunn)

TORONTO — Changes to federal quarantine requirements for temporary foreign workers do nothing to protect them from COVID-19, advocates said Wednesday, calling for the workers to be granted permanent resident status as a way to increase their rights.

Ottawa announced adjustments Tuesday that mean migrant workers are no longer entirely exempt from having to stay in quarantine hotels after landing in Canada.

The Migrant Rights Network said the changes, which take effect March 21, ignore long-standing requests to give permanent resident status to the thousands of workers who take up jobs at Canadian farms and greenhouses each year.

“This announcement does not address this fundamental need and isn’t actually providing any protections to migrant workers,” said Syed Hussan, spokesman for the group.

“(That status) would help them access and enforce rights to protect themselves without fear of homelessness, deportation, losing their job and not being able to come back in the future,”

Hussan said migrant advocates would also like to see the government focus on improving housing conditions and workplace inspections to keep workers safe as the pandemic continues.

Under the new rules announced Tuesday, workers who do not have private transportation to their places of employment have to wait in quarantine hotels for up to three days until they receive the results of a COVID-19 test all travellers must take on arrival.

The hotel quarantine is part of a 14-day isolation period all incoming travellers have to complete.

Asymptomatic foreign workers who have private transportation can head to their work locations to quarantine, so long as they are accompanied only by others who came with them to Canada.

The federal government said it intends to ensure employers and temporary foreign workers will not assume “incremental costs” associated with the hotel quarantine requirement.

Last year, migrant workers were ordered to isolate for 14 days on the farms where they would be working.

The president of the Ontario Federation of Agriculture said Wednesday that farmers expected that would continue to be the policy, but the new changes have created “frustration and confusion”.

Keith Currie said in Ontario, where 20,000 temporary foreign workers are employed on farms each year, the new rules will complicate the arrival of many workers.

“We support the public health initiatives to make sure everybody coming into Canada is healthy … but a lot of the logistics just haven’t been worked out,” he said. “We’re working with the government to get these frustrations fixed as soon as possible.”

Currie said farms charter flights and ground transportation in many cases and can work with the new requirements, but it’s not possible in all instances.

Employers are responsible for paying for the costs associated with migrant workers’ quarantine, as well as paying them for that time.

Farmers and workers are concerned that despite the federal pledge to offset costs, they may still be on the hook for fees associated with hotel stays and additional testing, he added.

“If workers have to go into hotels at a cost of a couple thousand dollars per worker, and somebody has 500 workers … that’s a little bit unrealistic,” he said.

During the first wave of the pandemic, dozens of farm outbreaks were reported across Ontario as the province struggled to test and isolate workers.

More than 1,780 temporary foreign workers in Ontario tested positive for COVID-19 in 2020, and three died of the virus.

Employment and Social Development Canada did not immediately respond to a request for comment Wednesday.

But federal Employment and Workforce Development Minister Carla Qualtrough said Tuesday that the health and safety of temporary foreign workers is a key priority for the government.

“This comprehensive plan builds on and strengthens existing measures to ensure workers and employers are well prepared to meet public health requirements to mitigate the risk of the spread of COVID-19,” she said.