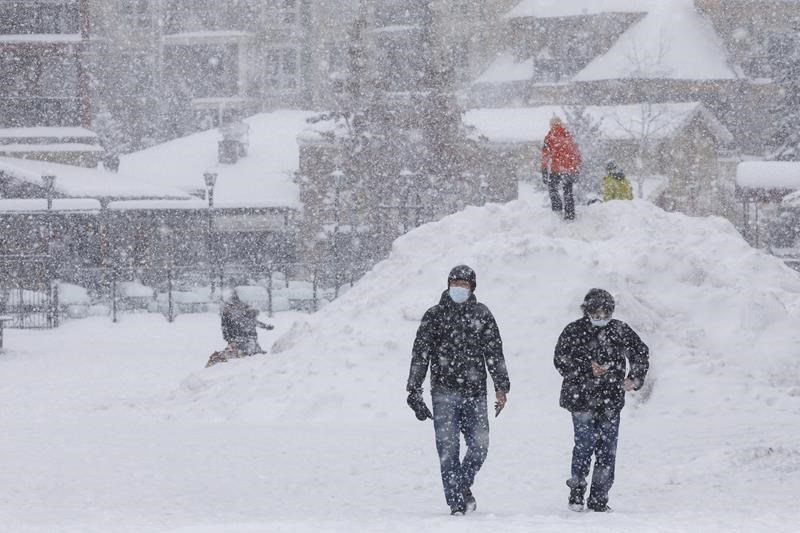 WINNIPEG — Don’t let Monday’s balmy temperatures fool you, winter is about to make a return… with a vengeance.

A special weather statement issued by Environment Canada says a strong low-pressure system is developing over Alberta and will track eastwards across the central Prairies early this week. With it will come strong winds, heavy snow, blowing snow and patchy freezing rain beginning overnight Sunday into Monday morning and lasting into Tuesday evening.

“Southern Manitoba will see a brief period of mild temperatures on Monday as southerly winds usher in warm temperatures ahead of the developing low,” the statement reads. “Temperatures will rise into the mid to upper teens by mid day followed by rapidly falling temperatures into the minus teens by evening and overnight behind a strong cold front.”

The weather service says southwestern portions of the province will see strong to severe winds on Monday afternoon with gusts as high as 90 km/h. Further east, into the Red River Valley and Interlake, winds will still be strong, with gusts to 70 or 80 km/h likely.

With the strong winds and freezing temperatures will come flurries and snow squalls, some of which may start out as rain showers before switching over to snow as temperatures plummet.

Environment Canada is forecasting snowfall amounts between 2 to 4 cm across the south, with heavier snow likely across the central Interlake where 5 to 10 cm will be possible.

“The heaviest snow will track from east of Lake Winnipeg northwards into central and northern Manitoba, where winter storm watches are in effect,” the statement concludes. “Blowing snow will reduce visibilities to near zero at times in heavy flurry activity so travel will be particularly hazardous late Monday into Monday night and Tuesday.”

The good news — if there is any — will be that conditions will improve on Tuesday evening as the system heads east into Ontario.

← Previous: Canadian Blood Services Says Donations from Those Who Have Had COVID-19 Are Safe Next: Two People in Hospital After Pair of Saturday Shootings →
Tags: Manitoba | Snow | Weather | Winter