Home » Sports » Shelley Brown Part 2: Coming Out of the Darkness

Shelley Brown Part 2: Coming Out of the Darkness 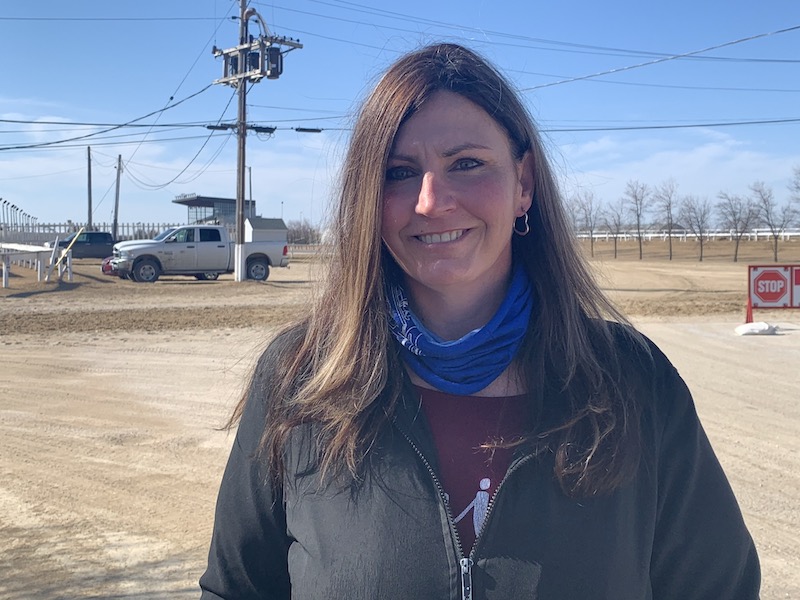 Former Assiniboia Downs Champion Trainer, Shelley Brown, is back at her barn at ASD this spring, cleaning out stalls, saddling horses and preparing for the 2021 thoroughbred racing season. But there was a time, not long ago, when doctors told her she would not be alive when this year’s spring training workouts were scheduled to start. This is Part II of Shelley Brown’s incredible comeback.

It was September of 2020 and thoroughbred trainer Shelley Brown had never been sicker. Not at any point in her life. Despite the fact she was going to work every day, she could barely finish a full shift at the barn.

In fact, were it not for her over-achieving staff, the entire 2020 racing season might have been a complete disaster.

Now, however, there were a couple of weeks to go before the end of the meet and Brown couldn’t stand it any longer. Wracked with pain, she desperately needed a second opinion. Her family doctor had told her twice that she was fine, but she knew, she was anything but fine. She had taken a hit from one of the horses in her barn, knocked her hard into a wall in the stall, but still, she was starting to believe that her pain was more than just a bump or a bruise.

“After four days of not being able to sleep, I said, ‘That’s enough.’ And went into a clinic to get checked out,” she recalled. “When I got there, they wanted to take an X-ray. My first thought was ‘How long will this take,’ but it was slow that morning and the nurse said, ‘We’ll have you in and out of X-ray in 15 minutes.’ So, like she said, I’m in and out really quick, but I’m in the waiting room for what felt like a long time. I still thought they were going to tell me nothing’s wrong and you can go.

“But when she finally came out, she said, ‘You’re going to be transported by ambulance to Health Sciences Centre. You have a huge mass around your lungs. I thought, ‘Wow! The horse didn’t hit me that hard against the wall. Did she puncture a lung?’ And the nurse said, ‘We’re sending you to a respiratory therapist.’”

“So, I got to the Health Sciences Centre and right away they gave me a CATSCAN,” she said. “There were two doctors dealing with me and the first doctor came in and sat down and closed the drapes. I’m thinking, ‘Oh, my gosh, this doesn’t look good.’ And he said, ‘We have to have a conversation because what I’m going to tell you is life-changing.’

“My first thought was, ‘He’s going to tell me I’ve punctured a lung and I’m going to need surgery and there are still two weeks of racing left.’ He said, ‘Listen, I’ve been an emergency physician for a lot of years and I’ve never seen somebody walk in with as much cancer as you’ve got. You just don’t have cancer in your lungs. You have cancer everywhere. We’re seeing cancer in your chest, your lungs, your stomach, your ovaries, your pelvis, your hips, your spine, your shoulders, your sternum, your ribs and your liver.’ It would have been easier to name the parts of my body that didn’t have cancer. He said, ‘I’ve never seen somebody on first diagnosis with as much cancer as you have. It’s really bad.’ I was shocked. I was at a loss for words and I was scared as heck.”

Brown’s immediate thought was she was about to die. She had seen it all before in her family and she felt there was no hope.

“I watched my mom die of cancer,” she said. “My dad had cancer. I know how fast this can go.’ The doctor said, ‘I’m not going to sugarcoat this. You’re in really bad shape. Left untreated, you might have three-to-six months left.’

From that point on Brown lived a life of CATSCANs and bone scans. You name the treatment, Brown has had it. Fortunately for Brown, when her doctors did her breast biopsy, the results came back as a hormone-based cancer, something that is quite most receptive to treatment.

“They determined that it started in my right breast, so they had a starting point,” she explained. “They put me on letrozole, which induces menopause and Zoladex, which keeps me in menopause and then they got me onto a treatment with Ibrance.

“But in mid-October of 2020, I got really sick. They couldn’t get my fever under control and so they put me in the hospital and I just wasn’t getting better. But after a few days, I wasn’t getting better and I told them I wanted to go home. They’d locked down the hospitals, you couldn’t have anyone visit and I wanted to go home and be with my brother who was still in Winnipeg. I was so sick that I reached a point that I called some friends and told them I wasn’t going to make it. But then, a couple of days later, I started to feel better. A respiratory specialist named Dr. Brass put me on another course of antibiotics and I started feeling pretty good. In fact, that’s when I started feeling really good.”

Still, she had miles of treatment remaining. In fact, she needed another surgery on her lung.

“But then Dr. Brass called me and said, ‘Shelley, you need this surgery or you’re going to die. I know how much you don’t want this, but it’s your only option.’ And I just had such a great rapport with him that I decided to get a new date, had my second surgery and that left me with a drain that was really painful.

“But the surgery was a success, I started healing up and I felt good and that just started me moving on a forward progression ever since.”

“I’m doing fantastic,” she said. “My last bone scan was not that great. I have significant bone cancer. My tumours are shrinking and I have my appetite back. But my bone cancer is not improving. But I’m still around. I passed the six-month mark.

“It’s funny, but I sold most of my equipment last year thinking I wouldn’t be back and I’ve dropped from 40-plus horses in my barn to 23. My staff is here, people who have been with me for years. My crew is phenomenal and it takes the stress off me. I have four grooms and four exercise riders and it’s all running so smoothly.

“The love for the sport has come back. I think when you’re faced with the possibility of not anything ever again, or maybe not being here, you no longer spend a lot of time thinking, ‘Woe is me.’ We stress so much about little things that mean nothing. I just don’t stress about the little things anymore. I’m really happy to be here doing what I love. I’ve even been riding the last couple of weeks and I got a puppy. The most important thing for me now is being around people who are important to me. The material things don’t matter anymore. I’m thankful to be able to enjoy doing the thing I’ve done all my life. One week or 10 years or 50 years. I’ll take whatever time God is willing to give me.”

Brown has had plenty of help along the way. Her brother, who works at a bar in Montreal, left home and has stayed by her side. Her partner in Real Grace, Jean McEwen, wouldn’t buy back Brown’s 10 per cent stake in the horse and said, “Nope. No, you’re not. Owning that horse will give you something to look forward to, Shelley. He’s a nice horse. You picked him out. You bought him. If you want to make it, you have to have something to fight for.’

“I’m so thankful that my owners wouldn’t let me sell everything. Larry Falloon, a longtime owner of mine said, ‘I think it’s a good idea for you to keep horses.’ So, we kept the partnership and kept the young stock and we’re moving forward.”

Of course, it wasn’t just her owners that stood behind her. The people she competed against the hardest, other trainers and owners, came to her aid and support.

“To see how the racetrack community rallied around me during all of this has been an eye-opener for me,” she said. “I always felt like a lone wolf out here. I’ve always felt like the outcast or the black sheep. I never felt like I belonged. I had really a hard time my whole life feeling I was a part of something. I always felt alone.
“But when the racetrack came together and stood behind me and wished me well and all the messages and cards it just helped me keep going when I didn’t want to. Everybody helped boost me up when I wanted to throw in the towel. I’m thankful for my family, thankful for my friends and thankful for my racetrack family.”
Shelley Brown is not cured. She still has cancer. But she’s back at her barn 10 hours a day and will have horses at the gate when Assiniboia Downs opens on Monday, May 17.
“I have a lot of fun with this business,” she said. “It’s a lot of fun and a lot of stress. I have to try and manage the two and keep it all in balance.
“Ultimately, I just want to make the most of the time I have here. “I’ll take whatever time God is willing to give me and I’m going to enjoy it with the people and the animals that I care about.”