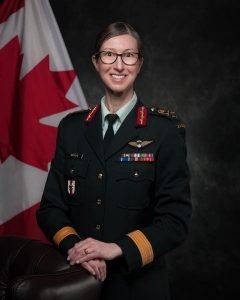 OTTAWA — The Liberal government is enlisting another military officer to take over from Maj.-Gen. Dany Fortin, who was abruptly sidelined last week from his role overseeing Canada’s COVID-19 vaccination campaign because of a military investigation.

Brig.-Gen. Krista Brodie will now be responsible for managing the country’s vaccine distribution and rollout efforts, which are expected to ramp up in the coming weeks as millions of shots arrive in the country ahead of summer.

The Public Health Agency announced Brodie’s appointment on Monday as the Liberal government was scrambling to reassure Canadians that the vaccination campaign would not be hurt by Fortin’s sudden departure, while also remaining tight-lipped over why he had been removed.

A 30-year veteran of the military with extensive logistics experience, Brodie is no stranger to the vaccine campaign. She had been working with Fortin since the latter was appointed in November to receive and distribute millions of vaccine doses from overseas to different provinces and territories.

The Department of National Defence issued a terse three-line statement on Friday evening that Fortin was leaving his role as head of the government’s vaccine distribution efforts because of an unspecified “military investigation.”

Some experts have expressed worry over the lack of information about the nature of the investigation given the importance of Fortin’s role and recent concerns about a lack of transparency and accountability from the military.

They had also questioned why it was taking the government so long to identify a replacement to lead the vaccination rollout.

The Canadian Press has confirmed via a source who was granted anonymity because they were not authorized to discuss the matter publicly that the investigation relates to an allegation of sexual misconduct.

CTV News reported on Sunday that Fortin is being investigated for having allegedly exposed himself to a woman while he was an officer cadet at the Royal Military College in Saint-Jean, Que., in 1989.

Fortin declined to comment in an email to The Canadian Press on Monday, but his military lawyer denied the general had done anything wrong.

“It is a news reporter who informed Maj.-Gen. Fortin of the allegation against him,” Cmdr. Mark Letourneau said in a statement. “This took him completely by surprise. He vigorously and categorically denies this allegation.”

Hours before Brodie’s appointment, Conservative Leader Erin O’Toole called on the government to provide Canadians with more information, and suggested its failure to do so represented a threat to public confidence in the military and the vaccine campaign.

“Justin Trudeau must be transparent with Canadians, who deserve confidence in our system, and that starts with providing information,” O’Toole said in a statement.

“The government released a statement late Friday announcing that Maj.-Gen. Fortin would no longer be in charge of the vaccine rollout while an investigation was ongoing, but have yet to confirm the nature of the investigation.”

O’Toole also demanded the government announce who will be taking over from Fortin, whose appointment to manage the vaccination campaign came after he’d overseen the NATO training mission in Iraq.

Prime Minister Justin Trudeau made a brief public appearance on Monday to announce federal funding for the hiring of auditors for home-energy retrofits, but he did not stick around to take any questions.

It instead fell to Natural Resources Minister Seamus O’Regan and Employment Minister Carla Qualtrough to answer questions about Fortin’s removal and what it would mean for the vaccination campaign.

The ministers played down any significant impact on the campaign, suggesting it is well underway and that other Canadian Armed Forces members are continuing to play an important role in the effort.

But both remained otherwise mum on the nature of the investigation, and when the government first learned about it.

“The mission is ongoing,” Qualtrough said at one point. “We keep delivering, we are keeping the operation going … so ultimately, at the end of the day, Canadians get the vaccines that we have to deliver to them.”