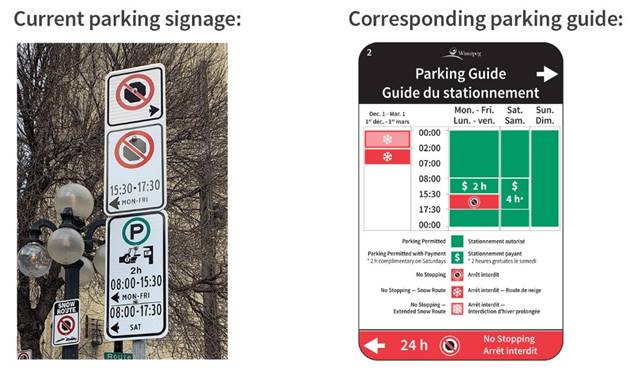 The City of Winnipeg is piloting new, colour-coded “timetables” in the Exchange District to improve the readability of parking signage.

Often a topic of criticism among drivers, the existing signs have been labelled as confusing, particularly when it comes to free parking after certain times on weeknights and on weekends.

“This is a great pilot project to make it easier for people to understand the fluctuating parking requirements in the Exchange District,” said Vivian Santos, Councillor for Point Douglas.

“We’ve heard from businesses that parking can be a barrier to visit the neighbourhood. These new guides, which incorporate universal design standards, will help address this challenge and communicate the parking requirements more clearly.”

The city says the new signs include an easy-to-read, colour-coded timetable that outline parking prohibitions in effect for the surrounding spaces. During the first phase of the pilot, the parking guides will be in place alongside the existing regulatory signage.

The second phase of the pilot project will include the removal of the existing parking signage in favour of the new designs. However, under the Highway Traffic Act, the move would need provincial approval, as well as a favourable vote by city council.

The city is accepting public feedback on the new signage through 311 until July 31.