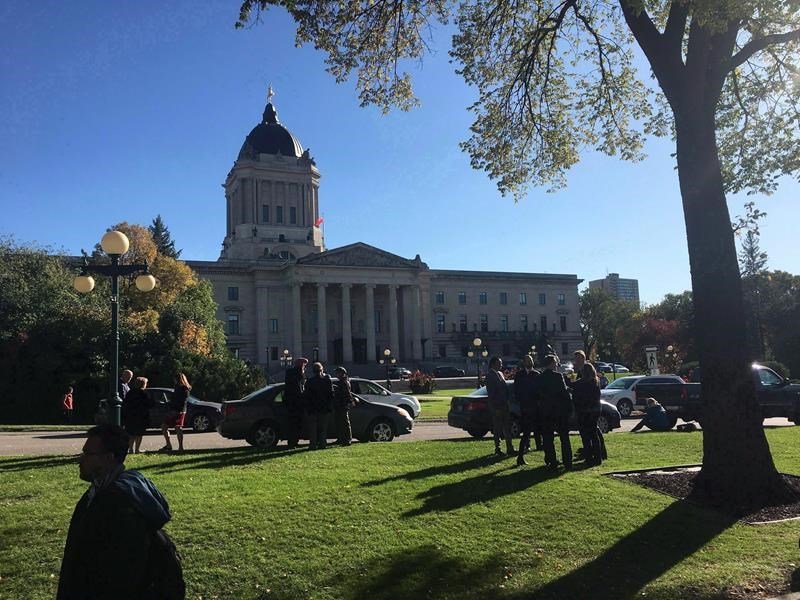 Politicians, staff and visitors are seen outside the Manitoba legislature in Winnipeg after it was evacuated due to a security threat on Oct. 5, 2017. (THE CANADIAN PRESS/Steve Lambert)

WINNIPEG — A 33-year-old man is facing charges after a truck was driven onto the steps of the Manitoba legislature.

Police in Winnipeg say the truck was being driven erratically towards the building Wednesday night.

It went through several safety cones before speeding up towards the main entrance and stopping midway up the stairs.

Police say the driver got out of the truck and was in an agitated state before being taken into custody.

A woman passenger was also arrested.

On Canada Day, two statues were toppled on the legislative grounds.

Ropes were tied around the statues and were used to haul them to the ground during a demonstration over the deaths of Indigenous children at residential schools.

The statue of Queen Victoria had its head removed. The head was recovered the next day from the nearby Assiniboine River.

A smaller statue of the current Queen, located close to the lieutenant-governor’s residence, was knocked over but left largely intact.

Const. Jay Murray says there is no indication the vandalism and the truck on the stairs were related.

He says there have been heightened tensions around the legislature in the last week.

“Our goal is ultimately to keep the peace,” Murray said at a news conference Thursday.

Finance Minister Scott Fielding said he was there when the truck drove up the stairs. He said there are conversations within government about increased security on the grounds.