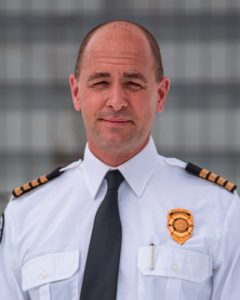 The Winnipeg Fire Paramedic Service is promoting from within its ranks to fill the role of the department’s next fire chief.

Deputy chief Christian Schmidt will assume the organization’s top position on August 14, taking over for outgoing chief John Lane, who is retiring after a 40-year emergency services career. Lane had led the WFPS since 2014.

“Christian has 27 years of experience in an emergency response environment with the City of Winnipeg and has exceptional knowledge, training, and experience in both paramedicine and firefighting disciplines,” interim city CAO Mike Ruta said in a memo to staff on Monday.

“During his tenure with the department, Christian has advanced into progressively more responsible positions within the field of emergency response and has held the position of deputy chief, operations & 911 communications since 2013. “