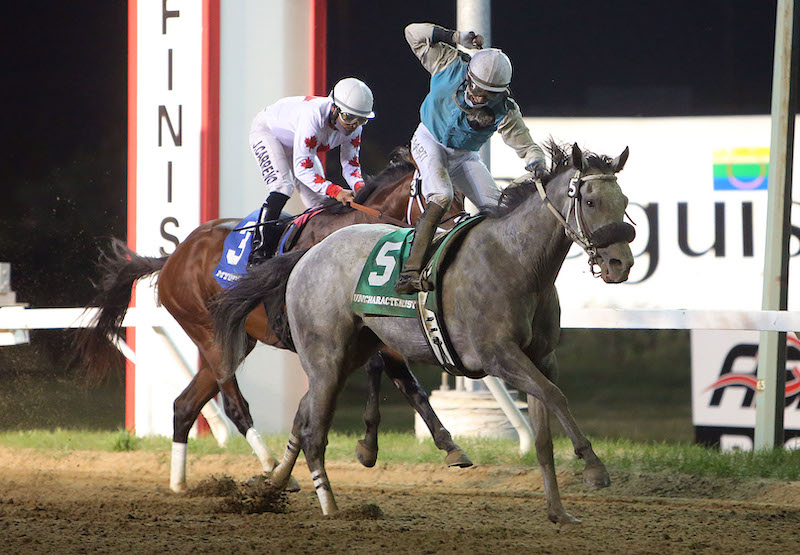 WINNIPEG — With an explosive burst down the stretch, Vancouver-invader Uncharacteristic came from off the pace to hunt down the heavy favourite Myopic and win the 73rd running of the $100,000 Manitoba Derby.

Myopic, the favourite at 1-5, led for almost the entire mile and an eighth on Monday night, but he simply didn’t have the finish to hold off Uncharacteristic, who took the lead with 1/16th of a mile to go and strode confidently to the wire.

Wagering for the night program totalled $2,542,309, a new Manitoba Derby program record, with a whopping $1,488,795 in the Jackpot Pick 5 pool as customers chased the $1 million guaranteed prize.

“What a night this year’s Derby was, and it was so great to have some fans attend again,” said Downs CEO Darren Dunn. “The full field for the race set up quite a finish. It was fantastic to hear that roar of the crowd. We are so thankful to horseplayers, horse-people and staff who all came together to pull off an outstanding event.”

The 2021 Derby was a two-horse race down the stretch. Jockey Jorge Carreno on Myopic, had to hold his horse back at the first turn to keep him from trying to run away from the field. Myopic led comfortably until the top of the stretch and then jockey Alexander Marti asked for Uncharacteristic to give him an extra gear and he got it. The two horses battled down the stretch but Uncharacteristic just had way too much in the tank. Warriors Hero won a battle for third with a group of horses that weren’t even in the same league as the two leaders.

The big grey/roan Uncharacteristic is owned by Adam Isfeld and trained by multiple stakes-winner Robert Vanoverschot, who won the 2002 Manitoba Derby with Lord Shogun. Uncharacteristic is by 2003 Gotham Stakes-G3 runner-up Texas Wildcatter out of the stakes-placed mare My Kentucky Rose by Breeders’ Cup Juvenile-G1 winner Macho Uno.

This was Uncharacteristic’s second win. In five starts, he’s won twice and finished second three times. All of his other races were at Hastings Racecourse in Vancouver.

Myopic, the overwhelming favourite, is owned by Arnold Bennewith, Rick Wiest, Clayton Wiest, Lana Wiest, Randy Howg, R6 Stables and Gary Kropp and trained by three-time Manitoba Derby-winner Robertino Diodoro. He went off at 1-5 and was a $200,000 purchase at the Fasig-Tipton Horses of Racing Age in July 2021. He won his previous race on June 23 at Indiana Grand.

The winner, Uncharacteristic, will earn at least $60,000 for finishing first. It was obviously worth the trip from Vancouver.