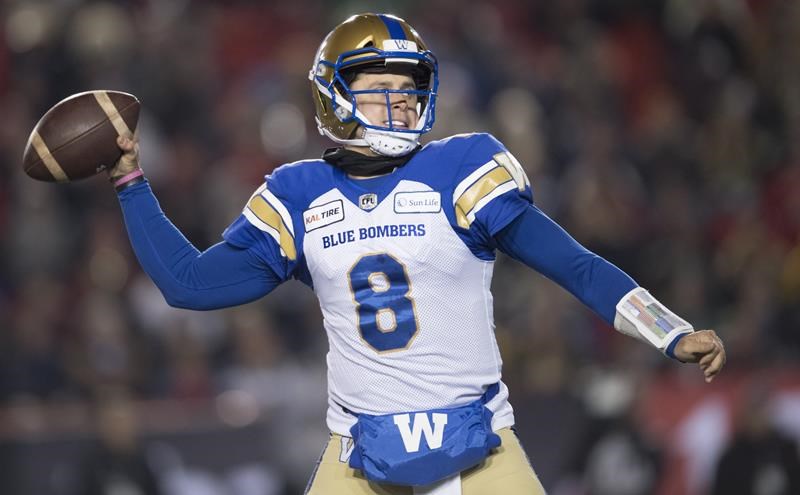 The Winnipeg Blue Bombers finally get to unfurl their Grey Cup banner Thursday, some 620 days after earning it.

Waiting to knock heads when the season-opening festivities end at IG Field are the Hamilton Tiger-Cats, who were at the wrong end of the 33-12 score at the 107th Grey Cup on Nov. 24, 2019, in Calgary.

“And even if it’s an away game for them, I just think the overall emotional level across the league amongst all the players and coaches and staff and fans will be at an all-time high. I think everybody’s missed the game terribly.”

The pandemic forced cancellation of the 2020 season and prompted a shortened 14-game campaign this year.

“I know there’s still a lot of things going on outside these walls and we’re thinking about that with family members and everybody else,” said Winnipeg offensive co-ordinator Buck Pierce. “But we’re excited to run out on that field and do what we love to do.”

Given what has happened since, the Grey Cup triumph seems a long time away. O’Shea is not one to rest on his laurels or worry about having a championship target on his team’s back.

“We believe that is a whole new season. It’s been a long time coming. Too long to get started, with a new team,” he said. “We believe and we respect every opponent. We believe they’re going to come in and give us their absolute best. All the time. That’s the only way you can really approach any game.”‘

“If you short-change any opponent, you’ll get beat,” he added.

The 2019 season was an eventful one for Winnipeg. The club started out 8-2 before ending on a 3-5 run to finish third in the West. Still, the Bombers dispatched Calgary and Saskatchewan on the road en route to the Grey Cup.

Injuries to quarterbacks Matt Nichols and Chris Streveler meant Zach Collaros was in charge for the business end of the season. A full training camp with Winnipeg can only help the 32-year-old Collaros, who was dealt to the Bombers by Toronto just prior to the league’s trade deadline in October 2019.

The Bombers have looked to keep their championship roster together.

But offensive co-ordinator Paul LaPolice left to take over the Ottawa Redblacks with Nichols, a free agent, joining him there. Nichols was released in January 2020, one day after Collaros signed a contract extension — a deal that was restructured this January.

Streveler, who played 35 games in two seasons (2018-19) with the Bombers, signed with the Arizona Cardinals in April 2020. Sean McGuire is the likely backup.

Pierce takes over for LaPolice while retaining his quarterback coaching duties.

Star running back Andrew Harris is coming off a 134-yard rushing, two-touchdown performance at the Grey Cup that made him the first player to win game MVP and top Canadian honours. The 34-year-old Winnipeg native led the league during the regular season for the third straight campaign, with 1,380 yards on 225 carries.

In 2019, Harris moved past Normie Kwong as the league’s Canadian career rushing leader (9,038 yards). He also passed Ben Cahoon to become the CFL’s career leader in yards from scrimmage by a Canadian.

A five-time CFL all-star, Harris was the league’s most outstanding Canadian in 2017.

Harris’s return may have to wait, however. The normally durable runner has seen little practice time due to a calf issue.

Brady Oliveira, a 23-year-old who attended the University of North Dakota, could fill in for Harris. A second-round pick (14th overall) in the 2019 draft, Oliveira fractured his ankle in the 2019 home opener.

“We’re excited about where Brady’s going and what he can do,” said Pierce.

Wide receiver Darvin Adams, meanwhile, has been dealing with a shoulder issue. The two-time West Division all-star was limited to 13 games due to injury in 2019, when he recorded 47 catches for 549 yards and five touchdowns. He posted back to-back 1,000-yard seasons in 2017 and 2018.

The defence will again be led by defensive lineman Willie Jefferson and linebacker Adam Bighill, with defensive co-ordinator Richie Hall pulling the strings.

Jefferson, an imposing figure at six foot seven and 248 pounds, was named the league’s top defensive player in 2019 after registering 24 tackles, a career-high 12 sacks, one interception and six forced fumbles.

Winnipeg spent the pre-season evaluating rookie kicker Marc Liegghio, an All-Canadian kicker and punter at Western University, and free-agent Tyler Crapigna, a former Saskatchewan Roughrider and Toronto Argonaut before being released by Montreal.

Special teams have been a strong point for the Bombers under special teams co-ordinator Paul Boudreau and O’Shea, a former special-teams coach with the Toronto Argonauts.

Fullback Matt Miller is just five away from tying the CFL record for special team tackles set by Jason Arakgi, who had 190 with the B.C. Lions from 2008-16.

LAST TIME OUT: The Bombers went 11-7-0 in the regular season, finishing third in the West. Winnipeg downed Calgary (35-14) and Saskatchewan (20-13) on the road before defeating Hamilton 33-12 for the Grey Cup.