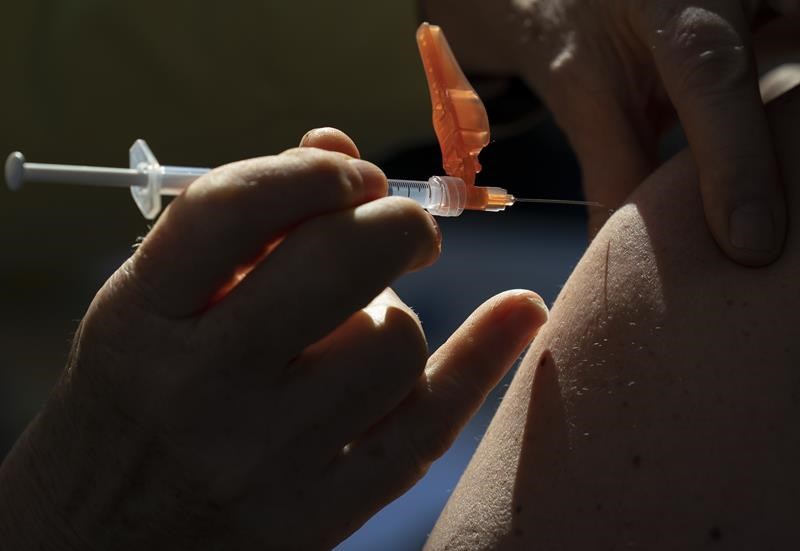 A dose of the Pfizer-BioNTech COVID-19 vaccine is given to a recipient at a vaccination site in Vancouver Thursday, March 11, 2021. Prime Minister Justin Trudeau will make good today on his election promise to require all federal employees to be fully vaccinated against COVID-19. (THE CANADIAN PRESS/Jonathan Hayward)

OTTAWA — The core public service, air travel and rail employees and passengers must all be fully vaccinated against COVID-19 by the end of October, according to Canada’s new mandatory vaccine policy.

The federal government announced Wednesday public servants must attest they are fully vaccinated against COVID-19 by Oct. 29, or be put on unpaid administrative leave.

Meanwhile, the government is working with employers of airport businesses, airline and rail companies to develop their own mandatory vaccine policies by the end of the month.

Anyone over the age of 12 who plans to hop aboard a plane at a Canadian airport or Via Rail or Rocky Mountaineer train must have received a second dose of a Health Canada-approved vaccine at least 14 days before their travels.

For travellers, there will be a short transition period to allow the unvaccinated to show a negative molecular COVID-19 test instead, though the grace period will last only until Nov. 30.

Cruise companies will also be asked to implement mandatory vaccines for employees and travellers in time for the 2022 season.

The new policy will affect more than 267,000 core public-service and RCMP workers, and will apply even to those who work from home and outside of the country.

“This … is about the government taking action on behalf of that majority who spoke in the election, to be sure that a minority of people cannot sabotage Canada’s economic recovery and cannot allow the fourth wave or other variants to cause real problems for us,” Deputy Prime Minister Chrystia Freeland said at a press briefing Wednesday.

But the Public Service Alliance of Canada (PSAC), which represents more than 160,000 federal workers, said the government did not properly consult with bargaining agents or incorporate any feedback from unions.

“We see that this is being rushed, without meaningful consultation,” said Chris Aylward, PSAC national president.

The Treasury Board Secretariat of Canada did not immediately respond to a request for comment.

The union has questions about how the government plans to protect workers’ private health information and how it will keep unvaccinated contract workers and visitors out of federal workspaces, he said.

“And of course, human rights, members’ human rights must be protected under the Canadian Human Rights Act, including the duty to accommodate,” Aylward said.

Workers will have to provide an attestation of their vaccine status online. The attestations will be tracked and audited by departments, and managers can ask for proof of vaccination at any time.

Employees who provide false attestations will be punished with disciplinary action, including firings.

People who have had only one dose will be given 10 weeks to get their next one before they are put on unpaid leave.

They will not be allowed back at work until they are either vaccinated or the policy is no longer in effect.

Aylward said options should be explored to accommodate unvaccinated workers.

“What about if this work can be done remotely? What about reassignment of duties? None of that was explored,” he said.

But the government has opted for a blunt approach.

“It’s very straightforward. If you want to continue to work for the public service of Canada, you’re going to need to be fully vaccinated,” Prime Minister Justin Trudeau said Wednesday.

Approximately 82 per cent of eligible Canadians have received a double dose of Health Canada-approved vaccines.

PSAC does not have a record of how many of its members are vaccinated, but expects the vast majority have had their shots.

There will be accommodations made for people who are unable to receive a vaccine on grounds protected under the Canadian Human Rights Act, which includes religious and health reasons for not having a full slate of vaccines.

Prime Minister Justin Trudeau said exemptions will be difficult and onerous to obtain, and simply having a personal conviction that vaccines are “bad” will not be sufficient.

The policy will be reviewed every six months, as it is closely tied to public health measures.

Stephane Aubry, vice-president of the Professional Institute of the Public Service of Canada (PIPSC), said his union is concerned about how those accommodations will play out.

While his union is not planning to challenge the new policy, they may have to file grievances on a case-by-case basis, he said.

“This is a concern for us because it’s pressure on the employees, and we will defend our members as much as we can,” Aubry said in an interview Wednesday.

The Union of Canadian Correctional Officers wrote to members that it will represent them through the grievance process if they choose not to get a COVID-19 vaccine, but warned the process could take two or three years and there is no court precedent that could predict the outcome.

Other federally regulated workplaces like Crown corporations and government agencies will be asked to mirror the public service mandatory vaccine policy for their employees.

The acting chief of the defence staff Gen. Wayne Eyre will also issue a directive requiring vaccination for the Canadian Armed Forces.