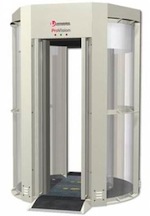 Airport security could get a little more embarrassing if the results from a recent pilot project are any indication.

Kelowna International Airport was the setting for a seven month test, which saw 32,000 passengers walk through whole body imaging technology. Known as a 3D scanner — it replaced the normal metal detector and gave security personnel an uncensored look at passengers.

The Canadian Air Transport Security Authority tested the technology and found that most passengers surveyed felt it was more effective than the traditional detectors.

The machine shows a complete outline of passengers’ genitals, breasts and all other sensitive areas. The executive director of the project calls it a “virtual strip search.”

Now the scanners could be making their way into other Canadian airports, but not before a serious debate given by privacy advocates. The machines don’t come cheap either; each unit runs around $200,000. The other downside is the speed at which officials can move passengers through them. Traditional metal detectors can see 300 to 600 passengers per hour — as opposed to only 61 per hour with the new 3D imaging units.