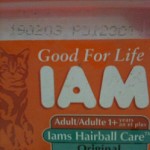 It was devastating enough to learn of the horror and abuse inside the Toronto Humane Society, but now we’re finding out that the food the poor animals were being fed had been expired for six years.

In a news release late Sunday, the Ontario Society for the Prevention of Cruelty to Animals said the expired food was being fed to cats with upper respiratory infections. Judy King, a local animal-care volunteer commented that “There isn’t a cat-owner in Toronto who would feed their sick cat six-year-old food. But at the THS House of Horrors, they did. Apparently there is no policy of cats before Fat Cats.”

Click the thumbnail on the left to see a bag of IAMS that expired on February 19, 2003.