Citytv Winnipeg Staff on Edge — Layoffs Could Come Next Week 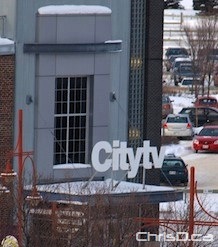 Citytv Winnipeg staff are hoping the bad news out east Tuesday doesn’t spread to their station.

Winnipeg staff fear the same could be coming next Monday, when a Rogers executive from Toronto arrives. But sources told ChrisD.ca jobs in Winnipeg will be safe and that there is nothing to be concerned about. Although, those same sources said they don’t trust Citytv management, so you can never be too sure.

We’re told since the vacating of GM Tom Scott, the opening for the position needs to be filled. That’s why Jamie Haggarty plans to interview candidates for the position on Monday. Haggarty is the current Executive Vice President of Television Operations for Rogers Media Television. Fears lie within the fact that the new general manager could end up cleaning house if Rogers doesn’t do it first.

The most laughable line out of the release was, “We believe in local television.” CTV Toronto reporter Chris Eby took a jab at that line himself on his Twitter page.

We’re told vacation time during the ratings period has been cancelled at the Winnipeg station — something management hasn’t reportedly done in years. Because of that, speculation is that the axe will drop soon, depending who you ask. A well-placed source at the station said that axe could drop as early as Monday or Tuesday.

Rogers laid off 900 employees in November 2009, which did not affect any of their Winnipeg stations, including Citytv, 92 CITI FM or 102.3 Clear FM.

Local Citytv management did not return a request for comment.

Meanwhile, in the middle of this whole mess, CTV Winnipeg posted an ad on Workopolis looking to fill a reporter position on Tuesday. Guess where a good chunk of those 60 resumes will end up?

UPDATE: Koreen Ott, Director of Marketing and PR for Rogers, did not mention any upcoming layoffs at Citytv Winnipeg, and only confirmed that no staff were affected locally on Tuesday. She would not comment on the possibility staff could be let go next week.

← Previous: The Forks Has Some Water Issues Next: Winnipeg Foundation Has Record Year for Grants →
Tags: Citytv | Rogers | Television