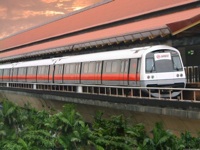 With the announcement this week of an accelerated football stadium to sit on the grounds of the University of Manitoba, the issue once again has been raised on how rapid transit will fit into the picture.

Back in September 2008, the city and province committed funding to the $138 million project and agreed to begin work on the first phase of construction. Work is currently underway, but the question on whether the rapid transit system will ever get beyond Jubilee Avenue and to the U of M’s Fort Garry campus still remains. The concerns comes from the fact that the second phase has not been put into the city’s budget, which could run up to $300 million.

Premier Greg Selinger commented on the issue Thursday, saying phase two is ‘possible,’ and that the provincial government has always been supportive of it.

The conflict lies with Mayor Sam Katz wanting to implement light rail transit instead of a second phase of bus rapid transit.

The Winnipeg Rapid Transit Coalition wants to see a second phase regardless, but has said that a rapid transit lane could later be converted to support light rail.