Home » Sports » Toews Getting a Manitoba Lake Named in His Honour

Toews Getting a Manitoba Lake Named in His Honour 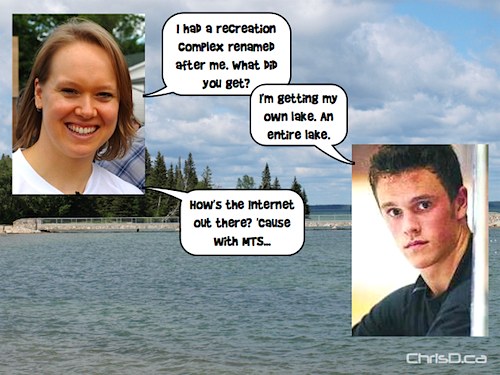 Winnipeg hockey star Jonathan Toews has quite a few accomplishments in his short professional career. An Olympic gold medal, Conn Smythe Trophy, the Stanley Cup, and now his own lake?

The Province of Manitoba said Wednesday a northern Manitoba lake would be named after the NHL champion. Before you fret, the current body of water is unnamed, and the province has yet to unveil its exact location. Premier Greg Selinger originally made the announcement on CJOB 68.

The 22-year-old Chicago Blackhawks captain is expected at a ceremony at the Manitoba Legislature this weekend, where the name of the lake will take effect immediately.

Further details are expected Sunday, the same day Toews will take part in a celebration with the Stanley Cup at City Hall, ride in a parade and greet fans at Dakota Community Centre. (full schedule)