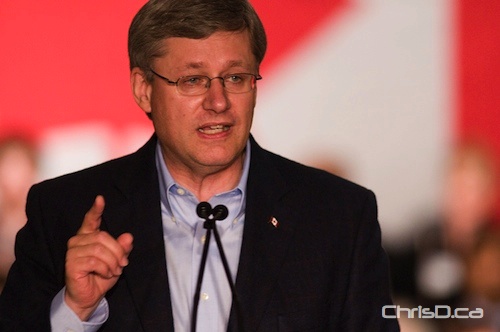 Speaking at Bristol Aerospace on Berry Street with hundreds of workers behind him, Harper tried to convince Canadians that the controversial purchase of F-35 fighter jets at a cost of $9 billion was justified.

Bristol Aerospace has secured a contract to manufacture assemblies for the horizontal tail section of the F-35 Joint Strike Fighter. The contract will increase employment at Bristol by up to 100 people.

With maintenance, the total cost of the new fleet could rise to $18 billion to replace Canada’s aging CF-18s.

Liberal opposition has previously pounced on the Conservative government for the deal, saying the agreement was awarded to Bristol without an open bid.

View the photo gallery below from Harper’s fundraiser:

Liberal leader Michael Ignatieff was also in Winnipeg on Thursday, where he spoke at Tyndall Park Community School as part of his Open Mike tour. On Friday, Ignatieff will take part in a photo op at Winnipeg Harvest at 10 a.m.