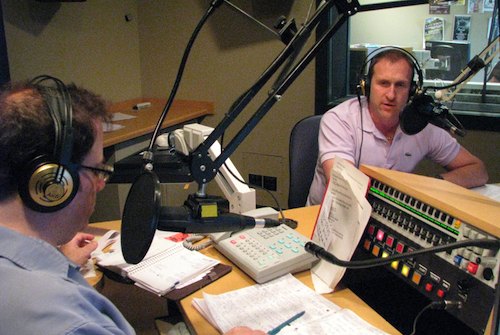 Former KICK FM radio personality Marty Gold has been podcasting ever since his show was cancelled nearly a month ago, continuing to dish out his views on civic issues and policy.

The outspoken alternative media host is now planning to host a live podcast version of “The Great Canadian Talk Show” with a studio audience. Quite the contrast from his four years over at the Red River College Princess Street campus.

The “Stand Up for Free Speech” event is planned for the Norwood Community Centre on Tuesday, December 7 at 7:30 p.m.

Special guests are slated, including regular characters from the show, such as Spirited Kenny.

“I will be revealing surprising documents from insiders that will prove that the reasons for the cancelation by the KICK FM Board are a cover-up, and there was no issue with students needing more air time,” Gold said in a statement. “There are special interests who put political pressure on the College to get their appointees on the KICK BOD (Board of Directors) to find a way to silence the voices of the community, and we have the proof.”

Tickets are $20 each and are available at CDI College, 280 Main Street, at the door, or by e-mailing [email protected].

← Previous: Hot 103 Mittens on Sale for Charity Today Next: Winnipeg Photogs to Give Back at Inner-City Schools →
Tags: Marty Gold | Radio