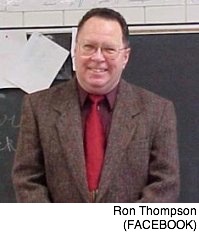 Former CKX-TV weatherman Ron Thompson has passed away after a battle with cancer.

Thompson spent the last several months in palliative care in Brandon before passing away peacefully on Sunday, friends tell ChrisD.ca.

Thompson, 68, gave viewers in Westman the weather for decades and also worked at what was then known as MTN in Winnipeg.

In late December, a Facebook group was flooded with messages from well-wishers to lift Thompson’s spirits as he took a turn for the worst.